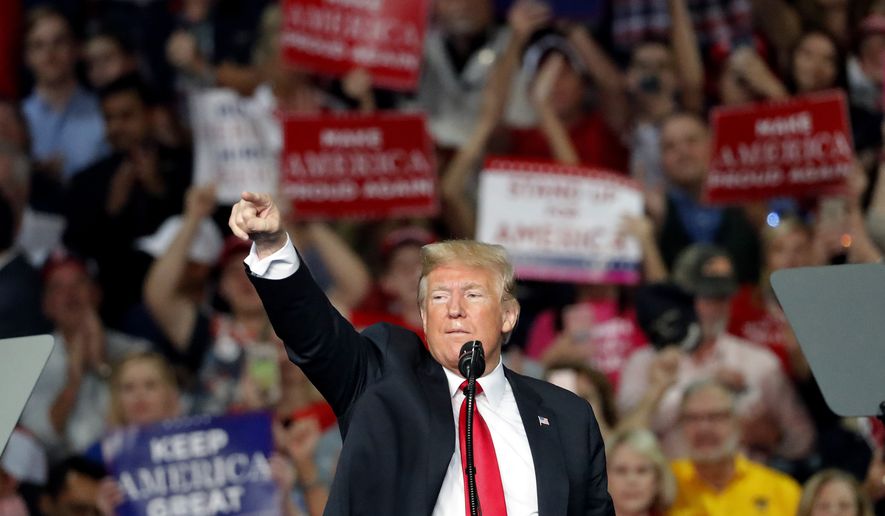 Republicans entered the 48-hour sprint to Election Day confident they can expand their Senate majority while bracing for a knife fight over the House, hoping their “can’t go back” message on the border and the booming economy eclipses the wave of college-educated women and suburbanites looking to punish President Trump.

Mr. Trump wrapped up the midterm campaign by rallying Sunday with Tennesseans who could determine whether the GOP expands its 51-49 Senate majority, as Republican Rep. Marsha Blackburn vies with former Democratic Gov. Phil Bredesen for an open Senate seat, before heading to Missouri Monday to try to flip a Democratic seat into the red column.

The events will cap a whirlwind tour for the president, who is focusing on the threat of illegal immigration and bitter fight over Supreme Court Justice Brett M. Kavanaugh’s confirmation to rally red state voters against vulnerable Senate Democrats in 10 states that Mr. Trump won two years ago, even though his economic message is better suited toward winning centrist, suburban voters who will determine House control.

“I think what you’re seeing with the president is he’s made a strategic decision that his ability to claim victory on election night will be by adding seats in the United States Senate,” said former New Jersey Gov. Chris Christie, a Trump ally, on ABC’s “This Week.” “And he doesn’t want to take the risk of looking like he’s trying too hard in the House, because then he may get blamed for losing there.”