by MORGAN CHALFANT AND BRETT SAMUELS | The Hill
October 22, 2020 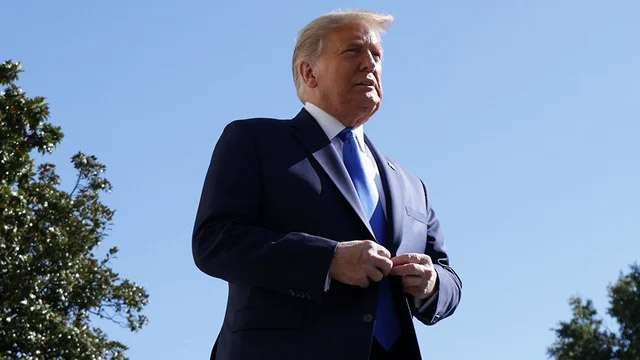 President Trump has one last major chance to meaningfully alter the trajectory of the presidential race as he faces off against Democratic nominee Joe Biden in Thursday’s debate in Nashville.

The first contest between the two descended into chaos and was viewed by Republicans as a missed opportunity largely of Trump’s own making. The final debate will feature a new rule allowing both candidates’ microphones to be muted at the start of each segment after Trump repeatedly interjected as Biden spoke in the first debate in Cleveland.

Trump and his allies have spent the week leading up to the debate attempting to lower expectations for the president by preemptively attacking the moderator, NBC’s Kristen Welker, and accusing the debate commission of shielding Biden from scrutiny.

Thursday’s debate comes at a time when the final result is increasingly out of any candidates’ control. Many Americans have already cast their ballots by mail or headed to the polls for early voting.

Public polls, which the Trump campaign has cast aside as skewed, show Biden with a lead nationally and in key battlegrounds. Still, the race appears tight in some swing states and Trump’s campaign is hoping for a repeat of 2016 when he surprised the country with his underdog victory.

Thursday’s debate is likely to be seen by tens of millions of Americans, giving Trump a chance to make a final pitch to remaining undecided voters. The first debate was marked by constant interruptions and personal attacks, and Trump spawned a days-long news cycle when he told a far-right militia group to “stand back and stand by.”

“The last debate is an opportunity to make a closing argument – why he deserves four more years and why Biden would be a bad president. I think that the first debate was a big reminder for most people as to why they want change,” said Alex Conant, former communications director for Marco Rubio’s 2016 presidential campaign.

“He needs to use this debate to remind people why they voted for him in the first place and why he is preferable to Biden,” Conant said.

The debate will take place in Nashville, Tenn., and will be broken up into six sections focused on the following topics: the coronavirus pandemic, American families, race in America, climate change, national security and leadership.

In an attempt to cut down on cross-talk, the Commission on Presidential Debates announced it would mute candidates’ microphones to allow Trump and Biden two minutes each to speak uninterrupted on each topic before unmuting them and allowing for a back-and-forth.

The Trump campaign bristled at the move, claiming it was intended to benefit Biden. But some allies believe it will actually benefit Trump, arguing that the president’s interruptions repeatedly bailed out the former vice president during the first debate.

“I think the president gives Joe Biden more time to hang himself on his policies which are inconsistent with mainstream values,” said Bryan Lanza, a former Trump campaign official, when asked about how Trump’s tact in this debate would differ from the first. Lanza noted that this approach could allow Biden more time to discuss his stance on controversial issues, like court packing and raising taxes.

The president has largely forgone traditional debate prep in advance of Thursday, and he hedged this week when he was asked in a “Fox & Friends” interview about potentially changing his approach. Many of the advisers who helped him prepare for the first debate — including Chris Christie, Kellyanne Conway and Hope Hicks — later contracted COVID-19.

Instead, Trump spent the week holding rallies in states that he won narrowly in 2016 in a bid to solidify his support. When he has discussed the debate, his focus has mostly been on grievances about the moderator and format of the debate.

The president and other conservatives have taken aim at Welker’s credibility, highlighting her parents’ donations to Democratic candidates. Hugh Hewitt, Brit Hume, Jon Karl and others have come to Welker’s defense, praising her as a fair journalist.

Trump and his campaign have also turned the Commission on Presidential Debates into a punching bag. The president this week again invoked a technical issue that led to his microphone being modulated in 2016; the campaign hammered the commission over its decision to hold a virtual town hall for the second debate before canceling it when Trump would not agree to participate; and advisers took issue that Thursday’s debate will not focus solely on foreign policy, an area they believe is favorable terrain for the incumbent.

“Trump is somebody who’s always going to try to work the refs, so to speak,” said Doug Heye, a former communications director for the Republican National Committee.

But Heye cautioned that the president risks going over the top with his criticisms and giving the impression he already thinks he’s going to lose the debate.

Republican senators have urged Trump to focus on policy and his agenda in the final stretch in order to help GOP chances of keeping both the White House and the majority in the Senate, rather than engage in personal attacks.

Some Republicans, like former Arkansas governor Mike Huckabee, have also argued that focusing on Hunter Biden’s business dealings is a mistake and that Trump would be better served talking about issues that impact voters’ lives.

“I’m not sure Hunter Biden is a winner. But if he hits Biden on cutting Social Security, opposing [Osama bin Laden] raid, wanting to shut down the economy again, his running mate undermining confidence in a vaccine, contrasting record on trade he will do much better,” said one former White House official, who criticized the Trump campaign for a lack of focus.

“He and his campaign are so bad at being focused and don’t — and never had — a real strategy besides throwing spaghetti at the wall,” the former official added.

Despite those naysayers, allies expect the president to make Biden’s son a line of attack on the debate stage, just as he did at the first one-on-one with the former vice president. Some believe Trump can raise Hunter Biden effectively if he can remain disciplined. It is also unclear how Biden, who has thus far been reluctant to respond to the New York Post story about his son’s business dealings, will try to fend off questions from Trump.

“The president is smart to focus on it because it will increase Republican turnout and hopefully help drive down Biden’s favorables, which are way too high,” said Sam Nunberg, an adviser to Trump’s 2016 campaign.

“The issue isn’t Hunter Biden’s personal problems, but the professional slimy business dealings, where I believe more will be revealed,” Nunberg said.