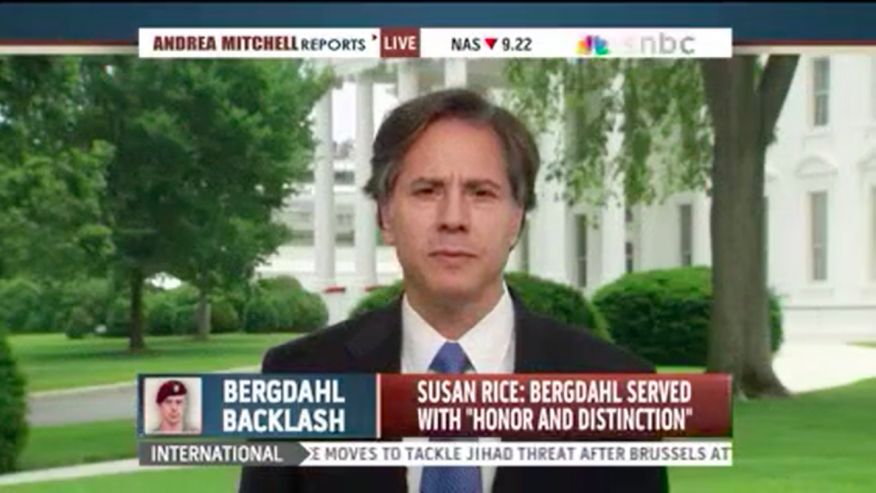 Deputy national security advisor Tony Blinken struggled to cover for his boss Susan Rice on Tuesday, backtracking from her contention that Army Sgt. Bowe Bergdahl “served with honor and distinction” in the face of tough questions from NBC reporter Andrea Mitchell.

Mitchell confronted Blinken over Rice’s Sunday claim that Bergdahl “served with honor and distinction” — an assertion almost immediately disproven by scores of Bergdahl’s comrades and official Pentagon reports, which show the soldier abandoned his post and may have been seeking to join the Taliban.

“Why did Susan Rice say he served with honor and distinction?” she asked. “It was clear to the military as soon as he left what had happened, according to his former fellow soldiers?”

“Andrea, as Chairman Dempsey said this morning, we need to give Sgt. Bergdahl an opportunity to tell his story,” Blinken dodged, refusing to address Rice’s claim. “Right now we’re focused on bringing him back to the United States. He hasn’t even spoken to his family yet. There’s a whole transition process that goes on.”

“Keep in mind,” the deputy national security advisor continued, ”he just spent five years in captivity in the most horrendous conditions possible. We want to bring him home, we want to reunite him with his family, we want to get him well. And then he’ll have an opportunity to tell us what happened.”