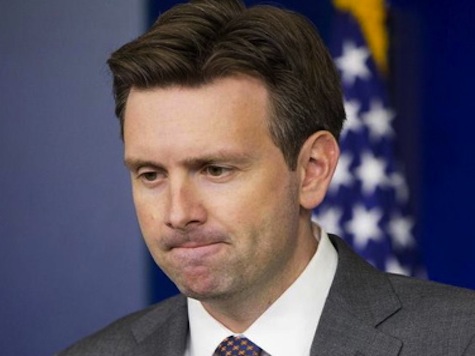 Thursday at the White House daily briefing, CBS’s Major Garrett, Fox News Channel’s Ed Henry and ABC’s Jonathan Karl took White House press secretary Josh Earnest to task for his answer that in the face of tens of thousands of Christians and ethic minorities being slaughtered by The Islamic State of Iraq and Syria (ISIS) they are “closely monitoring’ the situation with “deep concern.” Garrett pressed Earnest on if they had any plans to help the 40,000 members of one of Iraq’s oldest minorities, Yazidi sect, who are stranded on Mount Sinjar with no food or water surrounding by ISIS. Earnest said he could not detail any current plans but President Barack Obama is “keenly aware of the dire humanitarian situation that exists.”  A frustrated Ed Henry said, “Your closely watching people being slaughtered” and Josh Earnest would only answer this is a problem the Iraq people have to solve through their government and Obama is currently weighing the situation. Follow Pam Key on Twitter @pamkeyNEN