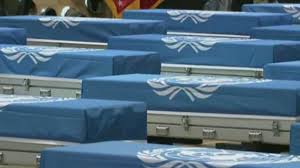 Two more U.S. service members have been identified from the 55 boxes of war remains that North Korea returned in July, officials said Monday.

The U.S. military will be notifying the families within days, directors for the Defense POW/MIA Accounting Agency (DPAA) said, according to The Military Times.

“The ID’s will be made officially in the next couple of days, 2-3 days ‚and the family will be notified within 24 hours of the ID’s being officially made,” DPAA Chief Scientist John Byrd told the Times.