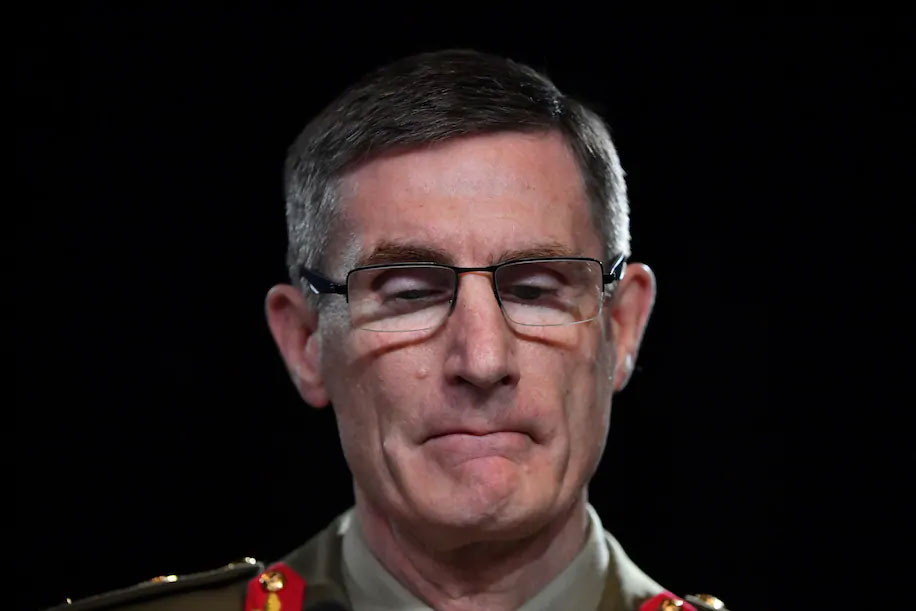 Campbell said a culture of “toxic competitiveness” that took hold of the SAS and another unit, the Second Commando Regiment, fueled a breakdown in discipline that led to the extrajudicial killings, including a practice of “blooding” where new soldiers who had never killed anyone in combat were pressured to execute prisoners.

The abuses, between 2006 and 2013, were disclosed in a heavily redacted report by the military’s inspector general released on Thursday after a four-year investigation.

The findings implicated 25 Australian soldiers in unlawful killings of Afghans, and recommended prosecutions against 19 of them. Some of the victims were adolescents, Campbell said. None of the killings took place during the heat of battle.

The allegations were greeted with shock in Australia, which joined the U.S.-led campaign in Afghanistan shortly after the terrorist attacks against the United States on Sept. 11, 2001. The SAS, which is equivalent to the U.S. Army’s Delta Force, is the most prestigious unit of the Australian Army.

Military investigators found that a small but influential group of its soldiers consciously put aside the rules of war and adopted a “self-centered warrior culture” that led to prisoners being killed and radios and weapons being planted on the victims’ bodies. Those who opposed these soldiers were intimidated into silence, which prevented reports from reaching commanders.

“The report notes that the distorted culture was embraced and amplified by some experienced, charismatic and influential noncommissioned officers and their proteges who sought to fuse military excellence with ego, elitism and entitlement,” Campbell said at a news conference in the capital, Canberra.

“We are a nation that stands up when something goes wrong and deals with it, and that’s what I intend to be part of.”

Afghanistan’s presidential office said on Twitter ahead of the report’s release that Australian Prime Minister Scott Morrison had spoken by telephone with Afghan President Ashraf Ghani to express regret over the abuses and to promise that justice would be served. Australia’s Foreign Ministry had sent a letter of apology for the actions of Australian forces, it added.

Campbell was in charge of Australian forces in the Middle East during part of the time the unlawful killings took place. The actions came to light when some soldiers told journalists stories of alleged war crimes, which some experts initially greeted with skepticism.

A special unit has been established by the government to amass evidence and prosecute the soldiers, some of whom still work in the army. The families of Afghan victims will be offered compensation, Campbell said.

An SAS unit, the 2nd squadron, will be abolished and its name retired, he said. Governor General David Hurley, the country’s ceremonial leader, will be asked to revoke a meritorious unit citation awarded to Australia’s special operations task force in Afghanistan between 2007 and 2014, he added.

There is no guarantee the investigation will result in convictions. Testimony provided by some 423 witnesses to the investigation is not admissible in court, and there is no certainty the tightly knit special forces soldiers will give evidence against each other in public trials.

Investigators found some soldiers used techniques to avoid giving information, which they had been taught to use if interrogated by the enemy.

There is also the possibility of future political interference. British governments obstructed investigations and prosecutions of war crimes in Afghanistan and Iraq, according to Human Rights Watch, an advocacy group. A six-year British investigation into the behavior of military special forces in the Afghan war closed in 2020 without charging any servicemen, it said.

“Canberra needs to learn lessons from the U.K.’s failed efforts to prosecute soldiers implicated in war crimes in Iraq,” said Elaine Pearson, the director of Human Rights Watch in Australia.

Australian investigators seem to understand that successful prosecutions may be difficult, citing problems in other Western nations that fought in the war.

“Even where the evidence is apparently strong and clear, pitfalls have been encountered, both political and popular,” the report said. “It is predictable that Australian prosecutions could encounter similar obstacles.”

The SAS soldiers have some supporters. A spokesman for Kerry Stokes, an Australian billionaire and media proprietor who helped establish a welfare fund for members of the unit in 1996, said that the fund may provide financial support for legal and other expenses to existing and former SAS soldiers.