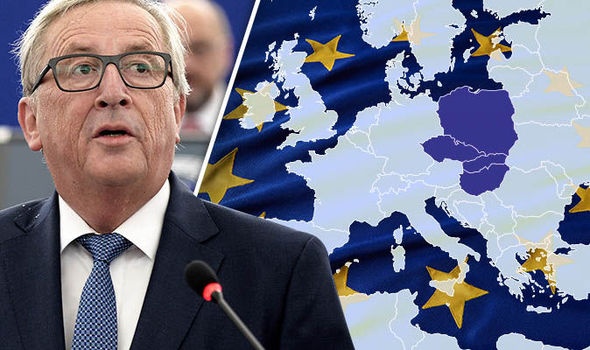 Members of the influential Visegrad group, which comprises of Poland, Hungary, the Czech Republic and Slovakia, rejected migrant quotas and blasted the overbearing EU Commission with an incendiary ultimatum.

The group represents a faction of nations which have become increasingly concerned by authoritarian Brussels, with Poland and Hungary both locked in bitter legal battles with the EU.

Their demands come after a separate clique of Mediterranean states, including France, Spain and Italy, formed their own interest group to counter the power wielded by Angela Merkel.

The developments are a sign of the spiralling disintegration of the EU which is seeing the bloc fray into a series of powerful factions, each fighting to impose their own interest on bureaucrats in Brussels.

In their statement the Visegrad group said: “Our ambition is to reassert the vision and principles enshrined in the Treaties and win back the trust of our citizens.”