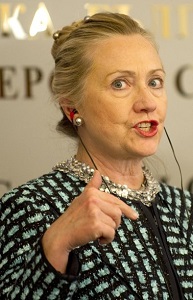 Emma Sky, who served as an adviser to one of the top US commanders in Iraq, claims in a new book that Mrs Clinton operated a “dysfunctional” diplomatic mission to Baghdad that allowed a lapse back into sectarian warfare after elections in 2010.

At that time Mrs Clinton was mid-way through her four-year stint as Mr Obama’s Secretary of State, the equivalent position to Foreign Secretary in Britain.

The criticisms, which come as Mrs Clinton announces her presidential bid, are contained in a book that Ms Sky, an Oxford-educated Middle East expert, is to publish next month about the seven years she spent in Iraq.

Entitled The Unraveling: High Hopes and Missed Opportunities in Iraq, it paints an unflattering picture of the Obama administration as it tried to extricate itself from the country as hastily as possible.