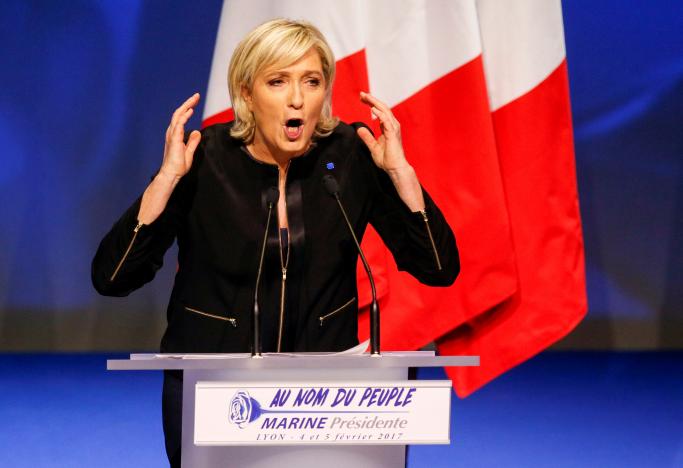 France’s far-right party leader Marine Le Pen on Sunday told thousands of flag-waving supporters chanting “This is our country!” that she alone could protect them against Islamic fundamentalism and globalization if elected president in May.

Buoyed by the election of President Donald Trump in the United States and by Britons’ vote to leave the European Union, Le Pen’s anti-immigration, anti-EU National Front (FN) hopes for similar populist momentum in France.

With hitherto favorite Francois Fillon, a conservative, embroiled in scandal over his wife’s job, and rising centrist star Emmanuel Macron as yet untested, Le Pen’s FN says it can thwart polls that see her losing in a second round run-off.

“What is at stake in this election … is whether France can still be a free nation,” Le Pen told supporters at her campaign launch rally. “The divide is not between the left and right any more but between patriots and globalists.”

In 144 “commitments” published on Saturday, Le Pen says she would drastically curb migration, expel all illegal migrants and restrict certain rights now available to all residents, including free education, to French citizens.