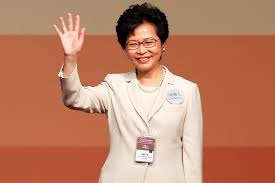 Hong Kong leader Carrie Lam vowed on Monday to push ahead with amendments to laws allowing suspects to be extradited to mainland China a day after the city’s biggest protest since its handover from British to Chinese rule in 1997.

Riot police ringed Hong Kong’s legislature and fought back a hardcore group of several hundred protesters who stayed behind early on Monday after Sunday’s peaceful march that organizers said drew more than a million people, or one in seven of the city’s people.

“I don’t think it is (an) appropriate decision for us now to pull out of this bill because of the very important objectives that this bill is intended to achieve,” a somber Lam told reporters while flanked by security and justice chiefs.

“While we will continue to do the communication and explanation there is very little merit to be gained to delay the bill. It will just cause more anxiety and divisiveness in society.”