Hungarians Press on With Protests as Orban Takes Aim at Soros 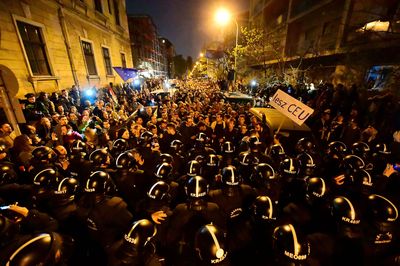 Anti-government protests resumed in Hungary after Prime Minister Viktor Orban said billionaire investor George Soros is the target of legislation to tighten rules on foreign colleges and civil-society groups for his support of open borders in Europe.

Thousands packed a square in central Budapest on Saturday evening to protest what they said were Orban’s attempts to quash dissenting voices in the European Union member state. Though smaller than some earlier demonstrations that drew tens of thousands, the protest over the traditional Easter holiday showed the resilience of the street opposition that produced the largest crowds against Orban since he took power in 2010.

The protests erupted after Orban’s lawmakers moved this month to push through a law creating new rules for universities. Central European University, founded in 1991 by the Hungarian-born Soros to train democratic leaders after decades of communism, said the law is aimed at driving it out of the country. Another government-sponsored bill would force civil-society groups receiving money from abroad to label themselves “foreign-funded,” which many groups say will stigmatize them.

“The whole issue is about George Soros, hiding from public view, supporting illegal immigration with loads of money via Hungarian organizations,” Orban said in an interview in the Magyar Idok newspaper on Saturday. Soros’s Open Society Foundations said last week that Orban’s steps are part of his rollback of a democracy.