Jimmy Carter: Hamas Leader Is Not a Terrorist, Wants Peace 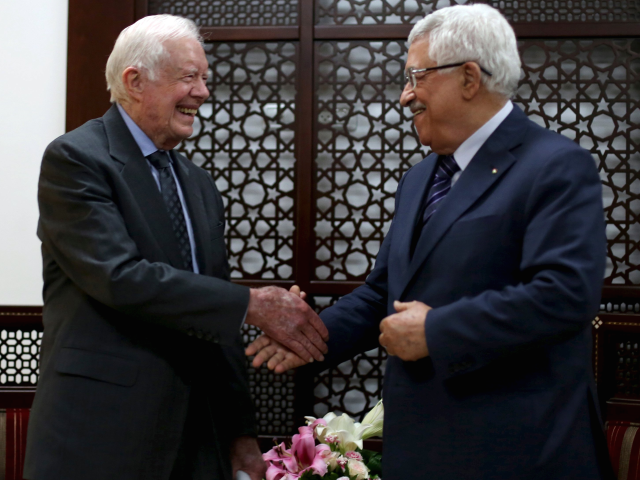 Former U.S. President Jimmy Carter visited Palestinian Authority leader Mahmoud Abbas this weekend at his headquarters in Ramallah, and declared that Hamas leader Khaled Meshaal is not a “terrorist.” Carter said that he would not meet with Israeli Prime Minister Benjamin Netanyahu because it was a “waste of time,” and that Meshaal not only wanted a “peace process,” but would commit to recognizing Israel as part of a deal brokered by Saudi Arabia.

Carter is detested by many Israelis after comparing the Jewish state to apartheid South Africa, and apparently justifying the use of suicide bombing in the first edition of his 2006 book, Palestine Peace Not Apartheid. He brokered the Camp David Accords in the late 1970s, which saw Israel trade the conquered Sinai peninsula to Egypt in exchange for peace and recognition. Since then, however, Carter has been a malevolent presence, and may even have convinced then-Palestinian leader Yasser Arafat to reject generous peace terms in 2000, resulting in the bloody second intifada soon afterwards.

In addition, Carter also called for new elections in all of the Palestinian territories, including both the West Bank and Gaza. The rival Fatah and Hamas factions, however, which govern the two respective territories, have been unable to put their own past differences behind them.