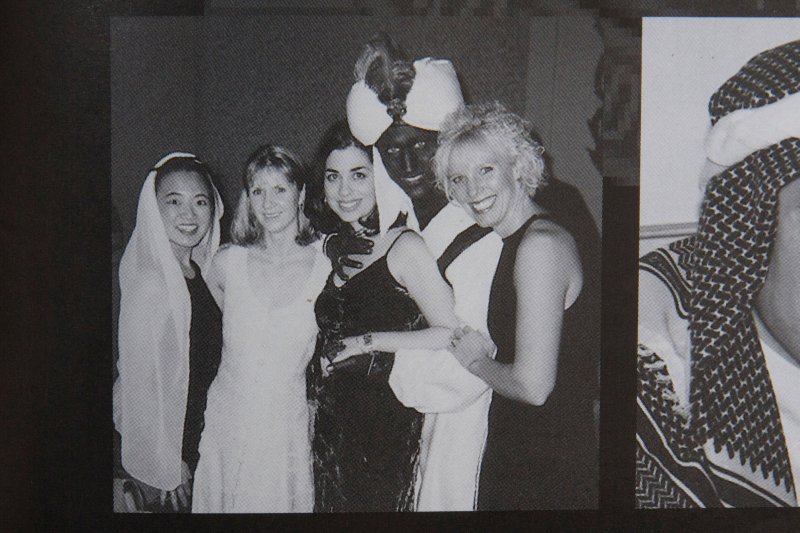 Justin Trudeau, Canada’s prime minister, wore brownface makeup to a party at the private school where he was teaching in the spring of 2001. TIME has obtained a photograph of the incident.

The photograph has not been previously reported. The picture was taken at an “Arabian Nights”-themed gala. It shows Trudeau, then the 29-year-old son of the late former Prime Minister Pierre Trudeau, wearing a turban and robes with his face, neck and hands completely darkened. The photograph appears in the 2000-2001 yearbook of West Point Grey Academy, a private day school where Trudeau was a teacher.

Earlier this month, TIME obtained a copy of the yearbook, The View, with the photograph of Trudeau in brownface from Vancouver businessman Michael Adamson, who was part of the West Point Grey Academy community. Adamson was not at the party, which was attended by school faculty, administrators and parents of students. He said that he first saw the photograph in July and felt it should be made public.

Speaking to reporters Wednesday night, following TIME’s publication of the photo, Trudeau apologized: “I shouldn’t have done that. I should have known better and I didn’t. I’m really sorry.” When asked if he thought the photograph was racist, he said, “Yes it was. I didn’t consider it racist at the time, but now we know better.”

Trudeau said he wore blackface “makeup” in high school to sing “Day-O,” a Jamaican folk song famously performed by African-American singer and civil rights activist Harry Belafonte. “I deeply regret that I did that,” he said.

On Wednesday, Zita Astravas, the media relations lead of the Liberal Party of Canada, which Trudeau is the leader of, confirmed that the prime minister was in the photo. “It was a photo taken while he was teaching in Vancouver, at the school’s annual dinner which had a costume theme of ‘Arabian Nights.’ He attended with friends and colleagues dressed as a character from Aladdin,” said Astravas. Trudeau is planning on addressing the photograph to the media later this evening, according to the Astravas. The prime minister’s official director of communications did not return multiple calls.

This is a critical moment for Trudeau, who began his re-election campaign on Sept. 11 under the cloud of a scandal over whether he pressured his then-attorney general to drop corruption charges against a large Canadian engineering firm. The Liberal Party leader has championed minority groups during his nearly four years as prime minister and made his embrace of Canada’s many cultures a major part of his leadership. At least seven of the 35 members of Trudeau’s cabinet are from ethnic minorities.

Trudeau has previously garnered regular media attention in the Canadian and global press for his choice of attire. In 2018, he was mocked for the elaborate Indian garb that he, his wife and their three children wore during a visit to India.

Trudeau was also criticized by artist Robert Davidson, who is a member of the Haida indigenous people, because of a tattoo on his left arm that is based on the artist’s work. Davidson said in 2016 that the Trudeau government’s approval of a natural gas facility opposed by the Haida showed the prime minister was not genuinely sensitive to concerns of Canada’s indigenous population.

TIME reached out to multiple people who attended West Point Grey’s spring gala in 2001, including three of the four women in the photo with Trudeau. Most were reluctant to talk about it. One former staff member declined to comment, citing loyalty to Trudeau. Others said they did not remember Trudeau at the party. Two people contacted by TIME acknowledged the existence of the picture, which has been the subject of gossip within the West Point Grey community.

Trudeau was not the only person in costume at the 2001 gala event. Of the individuals in six photographs from the event published in the yearbook, Trudeau appears to be the only one who darkened his skin. Many who dressed up for the “Arabian Nights” gala are still at the school, including current headmaster Stephen Anthony, who is pictured wearing what appears to be a crown.

Anthony did not respond to multiple requests for comment about the photo and the event.

Trudeau taught classes, including French, until he left after the spring of 2001. West Point Grey Academy is currently among the most expensive private day schools in Vancouver, with annual tuition ranging from just under $22,000 to about $23,500. During his 2015 election campaign, Trudeau downplayed his experience at the private academy, instead focusing on his time teaching at a public school in Vancouver.

Trudeau is far from the only public figure who darkened his skin in the past for a costume.

The United States has a long and painful history of white performers darkening their faces to demean and dehumanize African-Americans—a practice made popular by minstrel shows in the 19th century. Blackface continued into the 20th century in Broadway shows and Hollywood movies.

In February, Virginia Gov. Ralph Northam first apologized for, and then denied he was in a 1984 medical school yearbook photo that surfaced earlier this year showing a man in blackface and another in a Ku Klux Klan hood. Despite criticism, Northam declined to step aside. Alabama Gov. Kay Ivey also apologized this year after a radio interview from the 1960s surfaced in which she was described as wearing blackface.