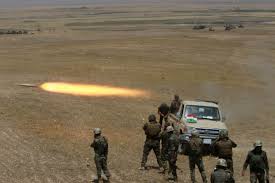 Kurdish Peshmerga forces launched a fresh attack on Islamic State (IS) forces early on Sunday as part of a campaign to capture Mosul, the militants’ de facto capital in Iraq, Kurdish officials said.

The advance began after heavy shelling and air strikes by a United States-led coalition against IS forces, a Reuters correspondent reported from Wardak, 30 km (19 miles) southeast of Mosul. The militants fought back, firing mortars at the advancing troops and detonating at least two car bombs.

A Peshmerga commander said a dozen villages had been taken from the ultra-hardline Sunni militants as Kurdish forces headed toward Gwer, the target of the operation, 40 km (25 miles) southeast of Mosul.

Repairing a bridge that the militants destroyed in Gwer would allow the Peshmerga to open a new front around Mosul. The bridge crosses the Grand Zab river that flows into the Tigris.

IS said in a statement on its Amaq news service that two car bombs driven by suicide fighters were detonated in one of the villages to block advancing Kurdish forces, causing casualties among the Peshmerga.