NETANYAHU THANKS TRUMP FOR KEEPING PROMISES, MOVING EMBASSY TO JERUSALEM 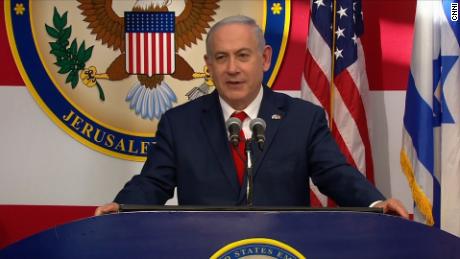 Sixty-nine years after Israel declared Jerusalem as its capital, and 23 years after the US Congress passed a law mandating that Washington move its embassy there, the US formally opened its embassy in the city on Monday afternoon, in a move Prime Minister Benjamin Netanyahu called “courageous” and “momentous.”

“Last December, President Trump became the first world leader to recognize Jerusalem as our capital, and today, the United States of America is opening its embassy right here in Jerusalem,” Netanyahu said. “Thank you President Trump, for having the courage to keep your promises!”

In a video address to the assembly, US President Donald Trump said the move was “a long time coming,” and that Israel, like all sovereign nations, has a right to name its own capital.