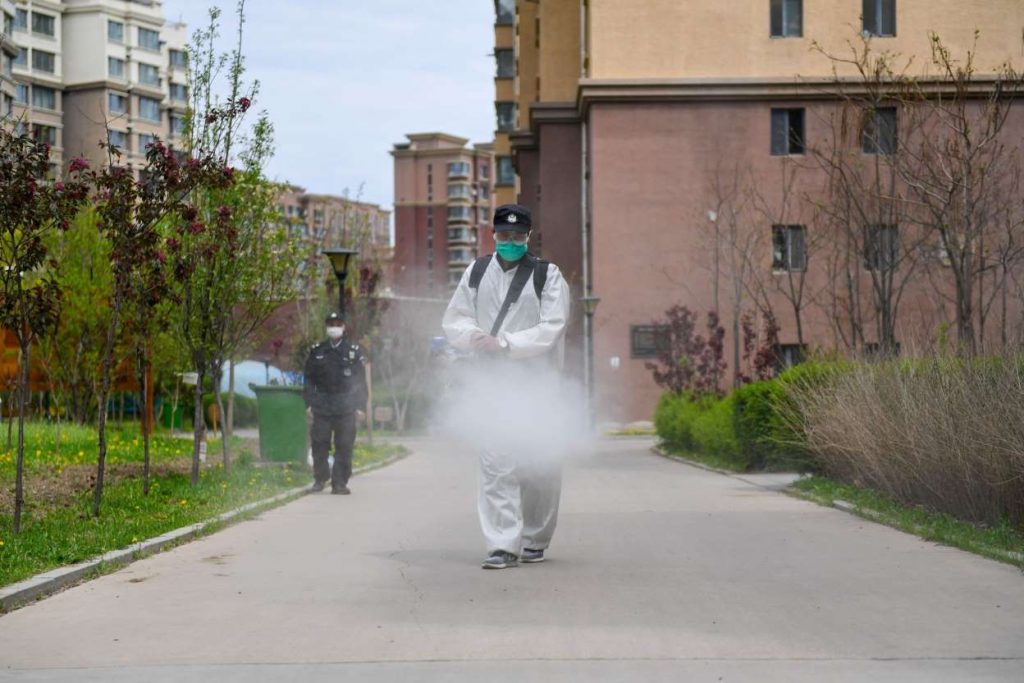 Some 108 million people in China’s northeast region are being plunged back under lockdown conditions as a new and growing cluster of infections causes a backslide in the nation’s return to normal.

In an abrupt reversal of the re-opening taking place across the nation, cities in Jilin province have cut off trains and buses, shut schools and quarantined tens of thousands of people. The strict measures have dismayed many residents who had thought the worst of the nation’s epidemic was over.

People “are feeling more cautious again,” said Fan Pai, who works at a trading company in Shenyang, a city in nearby Liaoning province that’s also facing renewed restrictions. “Children playing outside are wearing masks again” and health care workers are walking around in protective gear, she said. “It’s frustrating because you don’t know when it will end.”

While the cluster of 34 infections isn’t growing as quickly the outbreak in Wuhan which started the global pandemic last December, China’s swift and powerful reaction reflects its fear of a second wave after it curbed the virus’s spread at great economic and social cost. It’s also a sign of how fragile the re-opening process will be in China and elsewhere as even the slightest hint of a resurgence of infections could prompt a return to strict lockdown.

The government of Shulan, a city in Jilin, said on WeChat Monday it would put in place its strictest measures yet to contain the virus. Residential compounds with confirmed or suspected cases will be closed off, with only one person from each family allowed to leave to purchase essentials for two hours every two days.

Shen Jia, a Shenyang-based salesman at a life sciences company, canceled a three-day business trip to Jilin city last week because he would have been quarantined for as long as 21 days on his return. A state-owned restaurant he visited last week separated his party of three because only two people are allowed at each table, a restriction that had been eased weeks ago before being re-instated.

“You can feel that control is stricter,” he said. People “have been more careful and reduced outdoor activities.”

A sense of deja vu is permeating Jilin city, which underwent the same strict lockdown implemented in most of China in February and March despite only reporting daily cases in the single digits then. Overall, Jilin province’s total cases stand at 127; Hubei province had 68,000.

Still, delivery services have been mostly halted and anti-fever medication is banned at drugstores to prevent people from hiding their symptoms. The tension has spread to nearby areas, even if no cases have been reported officially in those places yet.

“Everyone is jittery,” said Wang Yuemei, a pharmaceutical factory worker in neighboring Tonghua. “I never ever expected Jilin province to be a hard-hit area when the whole country is getting back to normal now.”

After facing global criticism for its delayed response to Wuhan’s outbreak, President Xi Jinping’s administration is taking visible steps to stop the spread of the virus in the northeast. Vice Premier Sun Chunlan, who led the central government’s virus task force in Wuhan, arrived in Jilin city on May 13. The highest-ranking Communist Party official of Shulan, where the new cluster’s first infection emerged, was removed on Saturday along with five other cadres.

Pressure to contain the infections is even greater with China’s annual political meetings scheduled to commence this week in Beijing after being delayed from their usual March date. Thousands of political delegates will gather in the capital to endorse the government’s agenda from Friday and the central leadership is determined to project stability and calm during this period.

Health officials do not yet know how the new cluster started, but suspect that the patients may have come into contact with infected returnees from Russia, which has one of the worst outbreaks in Europe.

Those in charge of transporting potentially infected arrivals from abroad to centralized quarantine centers need to do a better job, said Wang Bin, a National Health Commission official, during a briefing on Sunday.

“Imported cases from overseas and clustered infections domestically have created dual pressure on us in containing the virus,” she said.

The new cluster is also a reminder that much of China still remains vulnerable to the virus because its first wave of infection was largely confined to Hubei province, where Wuhan is located, thanks to a lockdown that sealed the region off from the rest of the country in January.

“The majority of Chinese at the moment are still susceptible to the Covid-19 infection” because of a lack of herd immunity, top Chinese epidemiologist Zhong Nanshan told CNN over the weekend. The nation is facing a “big challenge,” he said, adding that the situation in China is “not better than foreign countries.”

Videos circulating on Chinese social media showed some senior high school students in tears when they were told to leave their campus because they’d lose precious time to prepare for their college entrance exams due in two months.

“It’s really unfortunate for us to encounter the epidemic at this point of time,” said Zhou Han, an 18-year-old student in Jilin. “I’m anxious because I can’t prepare for the exam well without last-minute instruction and supervision by my teachers.”