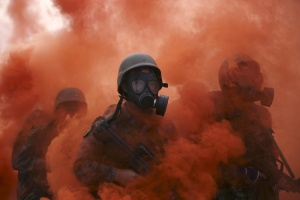 Munks said the previously undisclosed work was taking place at a weapons storage facility and a military base north of Latakia, suggesting Russia is preparing to place troops at both locations.

Russia has been dramatically increasing its forces at an air base south of Latakia, a stronghold of Syrian President Bashar al-Assad, including positioning combat planes and helicopters as well as tanks and accommodation blocks.