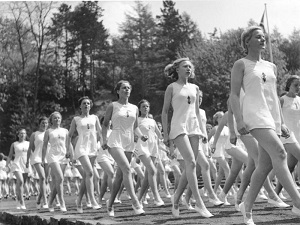 A team of Argentine archaeologists investigating a series of ruins in the jungle, close to the border with Paraguay, believe they have discovered a secret Nazi lair.

The cluster of stone structures, now covered by thick vines and accessible only when using a machete to cut through the undergrowth, contain stashes of German coins from the late 1930s, fragments of “Made in Germany” porcelain, and Nazi symbols on the walls.

“We can find no other explanation as to why anyone would build these structures, at such great effort and expense, in a site which at that time was totally inaccessible, away from the local community, with material which is not typical of the regional architecture,” said Daniel Schavelzon, leader of the team.

Mr Schavelzon, from the University of Buenos Aires, spent months exploring the site in the Teyu Cuare provincial park, in the Misiones region of northern Argentina. Local legend told that a house in the forest belonged to Martin Bormann – Hitler’s right-hand-man, who took his own life in May 1945 – but Mr Schavelzon said there was no evidence to support what he called “an urban myth”.