She Stoops To Conquer: Michelle Obama Stumbles In Japan 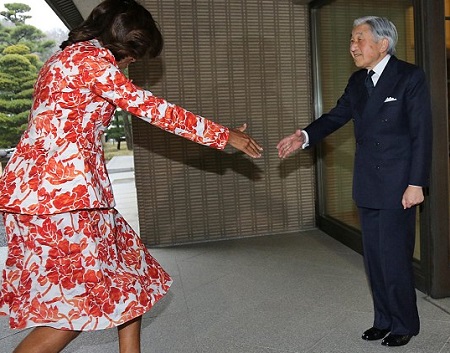 Michelle Obama has had an awkward start to her visit to Japan as she was pictured towering over Emperor Akihito and stumbling as she tried to bow, shake his hand and curtsey at once.

The First Lady, dressed in a florid combination of a blazer and skirt, dwarfed the Emperor in her silver stilettos, while he maintained his composure and smiled politely. She then squatted slightly while shaking his hand, seemingly trying to disguise the difference of height between them.

Mrs Obama, who is 5ft 9in tall, also caused embarrassment earlier in the day when she grabbed Akie Abe, wife of Japan’s Prime Minister Shinzo Abe, in a hug-and-handshake combination while the Japanese First Lady was trying to bow.