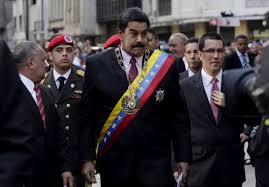 GEORGETOWN/CARACAS (Reuters) – Venezuela’s navy “intercepted” a ship exploring for oil on behalf of Exxon Mobil Corp (XOM.N) in Guyanese waters over the weekend, Guyana’s foreign ministry said in a statement, while neighboring Venezuela said the incident occurred within its territory.

The latest incident in a century-old border dispute comes after a series of offshore oil discoveries have given Guyana the potential to become one of Latin America’s largest producers. In OPEC member Venezuela, by contrast, crude output has tumbled to the lowest levels in nearly 70 years amid an economic crisis.

The Ramform Tethys vessel, which belongs to Norwegian company Petroleum Geo-Services (PGS) and was conducting seismic survey work on behalf of Exxon, stopped exploration and turned east after being approached by the Venezuelan navy, PGS spokesman Bard Stenberg said in a statement.

“Guyana rejects this illegal, aggressive and hostile act,” Guyana’s foreign ministry said in a statement late on Saturday, adding that the move “demonstrates the real threat to Guyana’s economic development by its western neighbor” and “violates the sovereignty and territorial integrity of our country.”