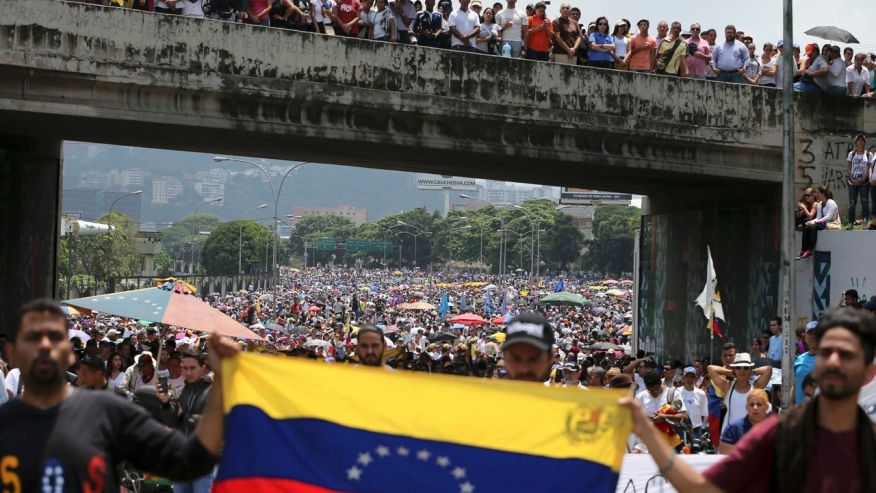 What is that old saying? “Those that don’t know History are doomed to repeat it…”

Honestly, I have heard so many variants of the adage that it makes no difference. The message is the same. Yet societies never learn.

As Venezuela is on the brink of Revolution, it’s corrupt Socialist Government knows that it’s days are numbered. Despite having the largest oil reserves in the world, Venezuela can’t feed its people, provide medical care or even keep the lights on.

As protesters hit the streets in Venezuela in droves of tens of thousands, crying and calling for the removal of the Venezuelan President; armed police and military are trying to keep the populace back. This can only end in bloodshed.

There has never been a successful socialist country. The argument was made to me that China is a Socialist Nation. The truth and rebuttal to that insane notion is simple. China, for the longest time was a COMMUNIST Nation. They have seen the ultimate failure of it and are transitioning to a Capitalist society. True, the Chinese Government maybe more Socialist in appearance today, but I feel that it is a transitional stepping stone. As we have seen a more Capitalistic appearance and mind set begin to take hold.

I like to think of the Second Amendment as a “Re-Set Button”. The Founding Fathers knew that any form of government can become corrupt and threaten the very lives of its people. They had just spent several years fighting against such a government. So, they provided a way to stop the tyranny should it ever arise again.

In Venezuela, the Government controls the food, the medicine and now the vast majority of firearms. If History has taught us anything, it’s that the next step for the South American country includes Mass Graves and a shattering death toll.

Now it would seem that Venezuela is arming their loyal socialist civilians to enforce order. Aside from reports of these new “Citizen Militia” members robbing people, there is also a growing fear that criminal organizations are getting their hands on some very serious fire power.

“Experts and U.S. policy makers have reportedly expressed concerns over the possibility of criminals in Venezuela acquiring part of its own military-grade weapons amid civil unrest.

Venezuela decided to arm civilians to defend the country’s socialist government. But the lack of control under Nicholas Maduro’s regime have sparked fears that some of weapons, including countless modern assault rifles and shoulder-fired surface-to-air missiles, may fall into the hands of terrorists or criminal groups, the Miami Herald reported Monday.

Military documents obtained by el Nuevo Herald show that Venezuela had purchased Russian-made surface-to-air missiles and though militias are only being armed with assault rifles, experts worry that some of the military gear could fall into civilian hands. The U.S. already had concerns with Venezuela having the missiles because of Caracas’ cozy ties with FARC in Colombia and Hezbollah, the Herald reported.” (Read More)

History keeps repeating itself. Stalin, Polpot, Hitler, Castro, Chavez… We will never learn. Will we?
Stay Armed my friends.