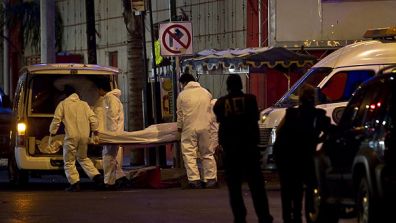 From The Wall Street Journal, FOXNews.com

MEXICO CITY â€“ Mexican officials blamed turf wars between some of the country’s most brutal drug cartels for a wave of violence across the nation that killed more than 40 people in three attacks, including 21 people massacred in a night club in the northern business capital of Monterrey, The Wall Street Journal reported Sunday.

The bloodiest attack took place Friday night at the gritty Sabino Gordo bar when gunmen with assault rifles shot down patrons and workers in Monterrey, a business center that became a battleground between the Zetas drug gang and the Gulf Cartel from the neighboring state of Tamaulipas.

That same day, 11 people were found shot to death in Chalco, just outside Mexico City. One person survived the attack. On Saturday, the decapitated bodies of 10 people, including three women, turned up in the northern city of Torreon in the trunk of a vehicle.