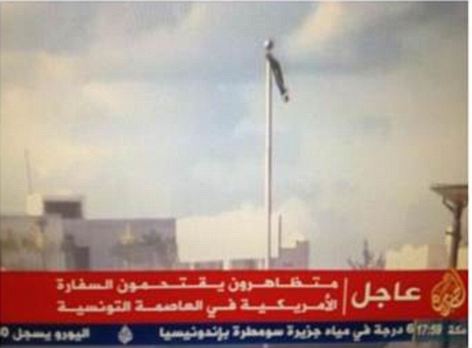 From The Cleveland Leader

A black Islamic flag is currently flying over the U.S. embassy in Tunisia after it had been stormed by an angry mob of protesters, who were upset over an anti-Islam film that was made by Americans.

This is just one of many incidents occurring around the world today, in which Americans are being targeted.

In Tunis, the mob overran the compound, scaling walls and setting fire to trees before tearing down the American flag and replacing it with a symbol of Islam. It is not thought that any U.S. staff were actually in the embassy in Tunis. An American school in Tunis was also set on fire. Police responded to the mobs by firing tear gas, and police gunfire could also be heard.

Several dozen protesters were also briefly able to enter the embassy compound and set fire to cars in the embassy parking lot. Police and special forces pushed them back outside.

In Lebanon today angry protesters ransacked a KFC and Hardee’s restaurant, police were firing on protesters in Yemen, and there was also unrest in Iraq, Syria, Pakistan and Turkey. Additional unrest occurred in Sudan where an angry mob attacked British and German embassies. In Bangladesh tens of thousands took to the streets to protest, and in India there are widespread protests in Muslim Kashmir. In London, protesters burned an American flag outside of the U.S. embassy.