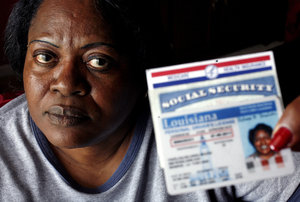 By GINA SMITH, The State

When Delores Freelon was born in 1952, her mother could not decide on a name for her. So the space on the birth certificate for a first name was left blank.

In the decades since, the incomplete birth certificate did not prevent Freelon from getting her driverâ€™s license and voter registration card in the various states she has lived, including Texas and Louisiana.
But a measure â€” already passed by the General Assembly and signed by Gov. Nikki Haley â€” will create new hurdles for Freelon and others to vote.

Called the Voter-ID bill, the measure will require all voters to present a picture ID at the polls, such as a passport, military ID card or a valid S.C. driverâ€™s license.

Without a complete birth certificate, Freelon and others like her cannot get an S.C. driverâ€™s license.

â€œIâ€™ve always voted, and I hate to think that I may lose the right. Itâ€™s going to be unfair to a whole lot of people who are like me,â€ Freelon said. â€œWeâ€™re going to lose our voting rights over a technicality.â€

The S.C. Progressive Network, the Legislative Black Caucus and other groups are launching an effort to stop the implementation of the new law, which must first gain approval from the U.S. Justice Department. Because of South Carolinaâ€™s history of voter discrimination, any changes to its voting laws must be approved by the federal agency.

About 178,000 S.C. voters do not have photo IDS, according to 2010 Election Commission data, and will be affected by the change.

During a Friday press conference, the groups encouraged South Carolinians who may lose the right to vote to step forward and help build a case against the bill.

Brett Bursey, director of the Progressive Network, said South Carolina is set to become the lone state that only recognizes its own state-issued ID to cast a vote. â€œThis is a bridge too high,â€ Bursey said. â€œThis will keep people from voting.â€