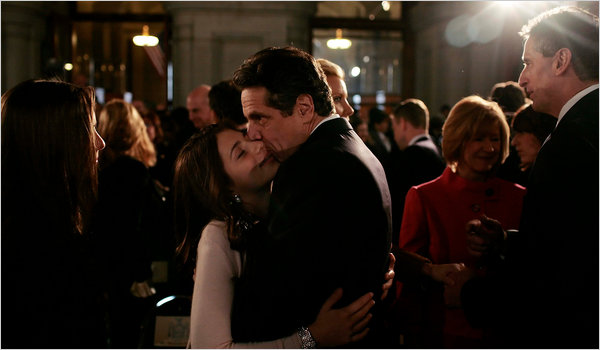 By DANNY HAKIM and NICHOLAS CONFESSORE, The New York Times

ALBANY â€” Andrew Mark Cuomo became the 56th governor of New York on Saturday, promising to immediately take on the stateâ€™s huge financial problems and to fight to limit taxes on homeowners across the state.

In his inaugural address, Mr. Cuomo said he would unveil an emergency financial plan this week â€” a month before his first budget proposal is due â€” and push aggressively for stronger ethics enforcement in Albany.

â€œThere is no more time to waste,â€ Mr. Cuomo, 53, said in a 25-minute speech, his voice often rising. â€œIt is a time for deeds, not words, and results, not rhetoric. It is time for a bold agenda and immediate action. There is no more waiting for tomorrow, and there are no more baby steps, my friends.â€

Mr. Cuomo, a Democrat, pledged to approach his job with â€œconstructive impatience,â€ shrink the size of the sprawling state government, and represent the interests of those who have lost faith in Albany.

He emphasized his plan to cap the growth of local property taxes, a particular concern to suburban and rural residents. That proposal is already setting off worry among local officials and some public-employee unions, who say that it will result in deep spending cuts in cities and towns.

Mr. Cuomo described residents as being imprisoned in their homes, which are losing value even as their tax bills keep climbing.

His first moves as governor were symbolic: Mr. Cuomo declared that he would remove the concrete barriers that have surrounded the Capitol building since the aftermath of the Sept. 11 attacks; within minutes of his speech, workers began loading the barriers onto a flatbed truck.

He also opened a historic hallway outside the governorâ€™s office that Gov. George E. Pataki had closed off to the public.