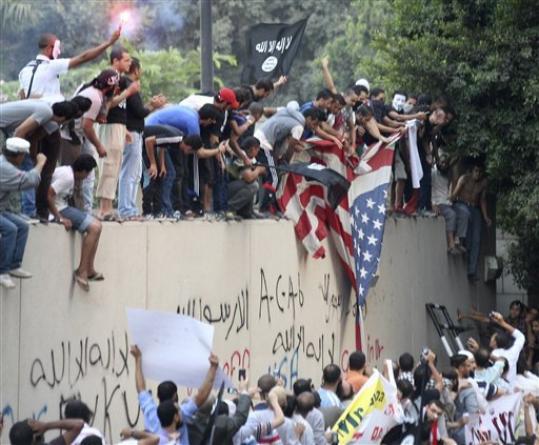 CAIROâ€”Mainly ultraconservative protesters climbed the walls of the U.S. Embassy in Egypt’s capital Tuesday and brought down the American flag, replacing it with a black Islamist flag to protest a U.S.-produced film attacking the Prophet Muhammad. Hours later, armed men in eastern Libya also stormed the US consulate there and set it on fire as anger spread.

It was the first time ever that the U.S. Embassy in Cairo has been breached and comes as Egypt is struggling to overcome months of unrest following the ouster of Hosni Mubarak’s autocratic regime. U.S. officials said no Americans were reported harmed in the assaults in Cairo or the eastern city of Benghazi.

The unrest in Cairo began when hundreds of protesters marched to the downtown embassy, gathering outside its walls and chanting against the movie and the U.S.

“Say it, don’t fear: Their ambassador must leave,” the crowd chanted.

Dozens of protesters then scaled the embassy walls, and several went into the courtyard and took down the flag from a pole. They brought it back to the crowd outside, which tried to burn it, but failing that tore it apart.

The protesters on the wall then raised on the flagpole a black flag with a Muslim declaration of faith, “There is no god but God and Muhammad is his prophet.” The flag, similar to the banner used by al-Qaida, is commonly used by ultraconservatives around the region.

The crowd grew throughout the evening with thousands standing outside the embassy. Dozens of riot police lined up along the embassy walls but did not stop protesters as they continued to climb and stand on the wall — though it appeared no more went into the compound.