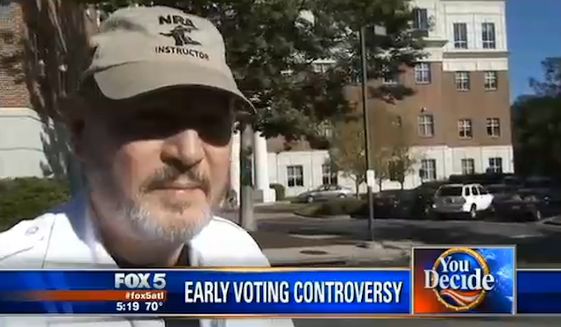 A Georgia man is upset after he went for early voting on Friday and was ordered to remove his National Rifle Association hat before he was allowed to vote.

Bundy Cobb, who is certified by the National Rifle Association in firearms training, wears his “NRA Instructor” hat everywhere he goes, partly to promote his business, True Aim Defense, The Daily Caller reported.

But last week he was told he couldn’t wear the hat while voting because it is supposedly too closely associated with the Republican Party.

“I went by the first two ladies, and they didn’t say anything. And then the next lady, she said ‘sir, you’re going to have to take off your hat,’” Mr. Cobb told The Daily Caller.

He said the poll worker explained that his pro-gun hat was perceived as being associated with the GOP and the tea party.