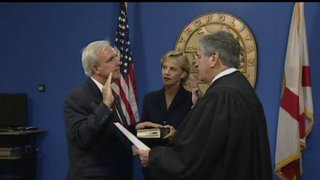 BY CHARLES RABIN, The Miami Herald

And just that quickly, for some the honeymoon with the new mayor was over.

The police union did not take the request from Gimenez, a former firefighter, well.

â€œThis is an insult beyond explanation,â€ said John Rivera, the feisty chief of the Police Benevolent Association, which is being asked to take deeper cuts than other unions. â€œIâ€™ll agree to that the day he agrees to combat pay for our men and women. Carlos Gimenez knows what itâ€™s like to ride on the back of a shiny red truck, but he has no idea what itâ€™s like to ride a green-and-white.â€

The details: Gimenez is asking the unions to give up the 3 percent raises, bonuses and merit increases that went into effect Friday. The request for cuts to the police went deeper: In addition to giving up raises and bonuses, Gimenez asked union leadership to forego step increases that would reduce salaries by more than 8 percent.

Overall savings, the mayor said in his letter to the unions, would be $151.6 million. And, he said, â€œbecause I am committed to leading by example,â€ he plans to cut $7.6 million in non-union employee pay, and cut his own $313,000 salary and benefits package in half.

Raising the specter of ousted mayor Carlos Alvarez, Gimenez said county residents have sent a clear message: â€œThey want to roll back the Alvarez tax increase. They want a smaller, more efficient government that they can afford. I agree wholeheartedly with them.â€

Rivera, the PBA chief, said he and the mayor are â€œnot going to see eye to eye.â€