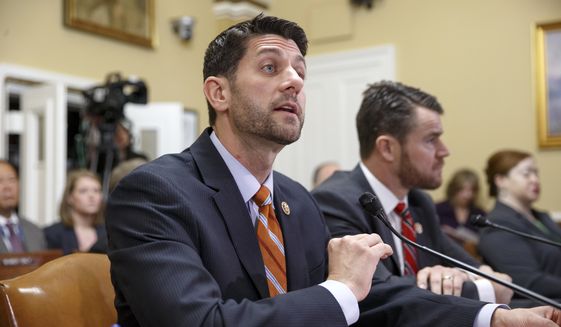 The House passed a bill Thursday that defines full-time work under Obamacare as a traditional 40 hours, with a dozen Democrats choosing to rebuff President Obama’s veto threat before the measure heads for a tougher test in the Senate.

The 252-172 vote to lift the bar from 30 hours to 40 marked the GOP-dominated Congress’ first stab at dismantling the Affordable Care Act, a cornerstone of their agenda now that Senate Majority Leader Mitch McConnell, Kentucky Republican, sets the votes in the upper chamber.

Critics say counting anyone who works at least 30 hours per week as full-time has forced employers to cut some workers’ hours to stay below the 50-employee threshold for having to comply with Obamacare’s business mandate to provide insurance or pay hefty fines. They say schools, restaurants and even home-health aid groups are especially hard-hit despite the rosy promises of health reform.

“It’s the fantasyland of Obamacare,” said Rep. Paul Ryan, Wisconsin Republican and chairman of the Ways and Means Committee.

Six fewer Democrats voted for the measure than an identical 40-hour bill last spring, although some of those lawmakers from the last round are not around anymore, having lost their reelection bids.

No Republicans voted against the bill.