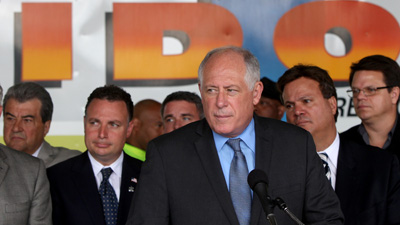 Gov. Pat Quinn signed into law the stateâ€™s Democratic-drawn map of new Congressional boundaries, a plan designed to reverse Republican gains in last yearâ€™s election that is expected to face a court challenge by GOP interests.

Democrats had unfettered control of the map-making process, a once-every-decade process mandated following the federal Census, by virtue of running the General Assembly and the governorâ€™s office. Due to Illinois’ slow population growth in contrast to other states, the state will lose one of its 19 congressional seats for the next decade.

The map pits some incumbent Republicans against others, stretches boundaries to allow incumbent Chicago Democrats to reach out into the GOP-leaning suburbs or gives GOP congressmen vast swatches of new unfamiliar territory.

In last yearâ€™s mid-term elections, Republicans picked up four seats while keeping control of the North Shore 10th District opened by Mark Kirkâ€™s successful Senate bid. giving the GOP an 11-8 edge. But the alignment of voters in the new districts could allow Democrats to pick up at least three seats.