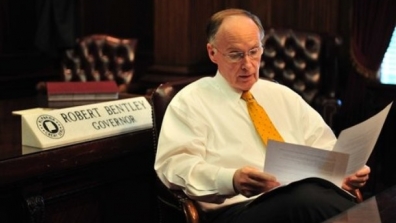 The governor of Alabama is taking the weekend to decide whether he will sign an Arizona-style bill into law to crack down on illegal immigrants.

If Gov. Robert Bentley gives his stamp of approval to the controversial legislation, the American Civil Liberties Union has vowed to challenge it in court.

“It’s an outrageous throwback to the pre-civil rights era and we call on Governor Bentley to veto this deeply misguided bill,” Cecillia Wang, director of the ACLU Immigrants’ Rights Project, said Friday. “The Alabama Legislature has invited rank discrimination into people’s everyday lives,”

The bill, passed by the Alabama Legislature on Thursday night, makes it a crime for a person to be in the state without a valid federal registration or other proof of legal presence.

Like the Arizona law, the bill allows police in a traffic stop to detain anyone without legal papers if the officers have “reasonable suspicion” that they may be present illegally and research by the officers can’t turn up any records. “Reasonable suspicion” could include acting nervously or having a tag that doesn’t match vehicle registration records, sponsors of the bill said.