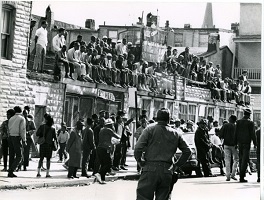 Marc Lamont Hill stated on MSNBC, “There shouldn’t be calm tonight. I think there can be resistance to oppression, and when resistance occurs, you can’t circumscribe resistance.”

He added that the riots should be called “uprisings. The city is not burning because of those protesters. The city is burning because the police killed Freddie Gray.” Sally Kohn of CNN tweeted, “Looting is a real shame. But FAR MORE shameful is pattern of police violence against black community! Perspective, people. #BaltimoreRising.”

Baltimore’s riots have prompted a state of emergency in the city, as well as the calling of the National Guard. But the riots should also demonstrate conclusively that leftist myths about what drives race riots are just that: myths.