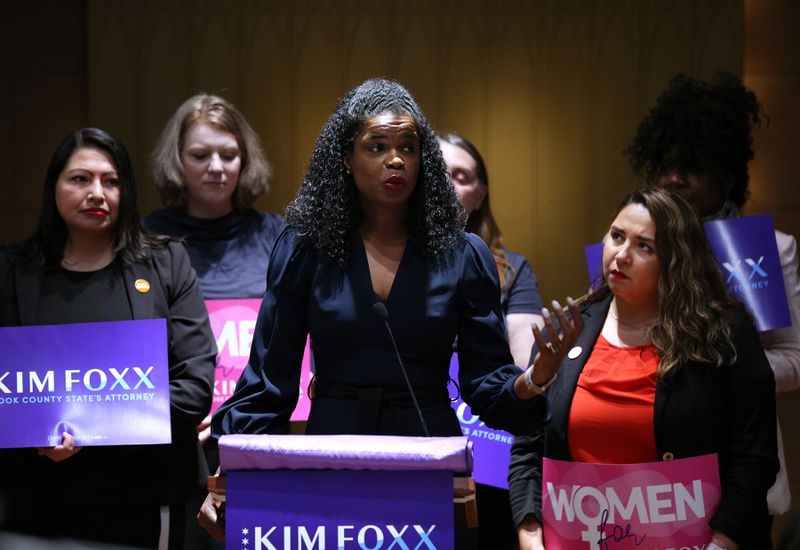 She has made the rounds at some of Chicago’s historic churches, asking congregants for their votes. She’s hosted nearly a dozen campaign rallies in Cook County, attended conversations with families directly affected by gun violence and tapped her allies to both endorse and publicly advocate for her — moves that would be considered typical for someone seeking reelection.

Nevertheless, Cook County State’s Attorney Kim Foxx’s bid for a second term as the county’s top prosecutor has been atypical.

While officeholders seeking reelection usually enjoy the advantages of incumbency — name recognition, a generally easier time fundraising and an established work record — Foxx has faced an unusual uphill climb. Facing an opponent with far deeper pockets, Foxx often has found herself on defense ahead of the state’s March 17 primary.

While she has tried to tout her efforts to reform the prosecutor’s office by focusing mainly on violent offenders and by leaning on principles of restorative justice, her message frequently has been up against the louder beating drum of the ongoing Jussie Smollett case.

“It’s hard to unseat incumbents in normal circumstances, but Mrs. Foxx doesn’t have normal circumstances,” said Alvin Tillery, a Northwestern University political science professor. “The (Jussie) Smollett case was high profile and it has emerged as the basis of the challengers’ case against her.”

In Conway, the son of a well-connected billionaire, she’s facing an opponent who can greatly outspend her and use his resources to pay for commercials and mailers that help shape the public’s perception.

At the same time, Foxx is constantly being hammered by all three candidates over her office’s handling of the Smollett case. The actor, best known for his role on the TV show “Empire,” is accused of staging a racist and homophobic attack against himself more than a year ago.

Her office dropped 16 charges against the actor last March, creating an outpouring of criticism and prompting then-Mayor Rahm Emanuel to call the move “a whitewash of justice.” A special Cook County grand jury last month indicted the actor on six counts of disorderly conduct, a move that Foxx’s campaign blasted as “the further politicization of the justice system” for its proximity to the primary.

The high-profile case, and her role in it, has made her competitors a stronger threat than they otherwise likely would be, Tillery said.

The ongoing outbreak of coronavirus could further affect the race as the candidates will be limited in their ability to campaign the weekend before Election Day. It’s also uncertain what role the coronavirus might have on voter turnout.

“In normal times, when nothing is going wrong, an incumbent doesn’t see these types of challenges,” Tillery said. “These are not normal times.”

Political strategist Delmarie Cobb echoed a similar sentiment. Foxx has major accomplishments, but they get overshadowed and that can be damaging on Election Day, she said.

Foxx’s campaign has focused on telling her story of rising from a low-income public housing community to holding one of the county’s most important public offices, Cobb said. But Foxx hasn’t worked hard enough to define her opponents to voters, Cobb said.

“What you see is people running for office because they are blank slates, they hope that being a blank slate can get them in because they have no record,” Cobb said. “But we are learning you have to just dig a little deeper — there is always a record that shows the public who a person really is.”

Political consultant Don Rose, who helped elect reform Republican Bernie Carey in 1972 and served as an adviser to Foxx in 2016, said he believes Foxx has a plurality of support and benefits from the crowded field.

Rose said a series of attacks Conway has run against Foxx attempting to link her with indicted Ald. Edward Burke “could be dangerous to her,” as it might hurt her with some progressive voters.

“Associations with Burke are really what killed off four candidacies for mayor and helped the present mayor win,” Rose said.

Foxx entered office amid a backlash against Anita Alvarez over the cover-up of Laquan McDonald’s killing by Chicago police Officer Jason Van Dyke.

The people with Foxx then are likely to stay with her now, Rose said.

Foxx has been playing up endorsements, including Mayor Lori Lightfoot’s, who was very popular in areas along the lakefront where Foxx may need help shoring up support.

Turnout could be a factor in the race, as well as the performance of the Democratic presidential candidates, former Vice President Joe Biden and Vermont Sen. Bernie Sanders.

One other potential wild card in the primary is whether Republican voters may play a role in deciding a winner.

Northwest Side Chicago Ald. Nick Sposato, 38th, said he expects to see an unusual number of people who traditionally vote Republican casting ballots in the Democratic primary, driven partly by their animus toward Foxx and a lack of competitive races in their party.

“There’s nobody to vote for on the Republican ballot,” said Sposato, who represents a ward with many first responders.

“A lot of them have had the idea, do I go ahead and vote a Democratic ballot and vote for pick your poison, any one of the other three (Democrats) in an attempt to try and knock out Foxx in the primary?” Morrison said.

“We discourage that as a party,” Morrison said. “We want Republican voters to vote in the Republican primary.”

Foxx herself has acknowledged the challenges she faces this election season, including the money Conway has raised in the race. At last count, Conway had raised more than $11.4 million, a figure that includes $10.5 million from his father, William Conway, co-founder of the Washington, D.C., investment firm the Carlyle Group.

Foxx has raised upward of $3.5 million and is the beneficiary of two outside political action committees that are spending money in the race.

“I am someone who not only is an African American woman, the first African American woman to hold this role, but I come from public housing,” she said at a recent news conference. “I’ve said oftentimes that I have a lot in common with the people who use our criminal justice systems sometimes more than even the lawyers that I work with. And having that perspective and putting that at the forefront is different. It’s unconventional here in Cook County. I think that has drawn people who have clung to the status quo — who want things to be the way they were.”

On a recent night, Foxx stood with nearly a dozen women beside her, most of them elected leaders, who were endorsing her reelection and trying to muster votes on her behalf. At the event, the women held colorful signs and chanted “four more years.” Then they stepped to the podium and gave personal testimonies about how they met Foxx and came to support her.

When it was her turn to speak, Cook County Board President Toni Preckwinkle told the gathering at Chicago Temple that she discouraged Foxx from running for the office against then-State’s Attorney Alvarez four years ago.

“Truth be told, I advised Kim against this,” she said, drawing laughter from the crowd. “I told her she was running against an incumbent, that’s always an uphill race. Her opposition would be well-financed. It would take a terrible toll on her family.”