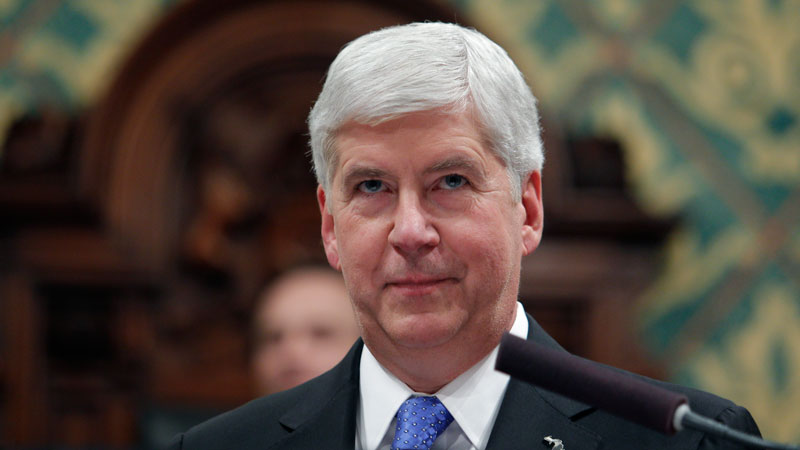 Former Michigan Governor Rick Snyder and others in his administration are expected to be charged for their role in the Flint water crisis, sources confirmed to CBS News. The ongoing crisis, which began in 2014, exposed residents of the majority Black community to high levels of lead and was also blamed for an outbreak of Legionnaires disease.

Snyder, former health director Nick Lyon and other former officials are expected to face charges, although specifics have not been announced. Since 2014, at least 15 current or former state and city officials and staff have been indicted in connection to the water crisis. Some of those charges had previously been dismissed, but the forthcoming charges are believed to stem from a newer investigation brought about by Governor Gretchen Whitmer’s administration.

“These are the first steps in the final process to securing justice for our community,” Flint Mayor Sheldon Neeley said of the news on Tuesday. “I commend Attorney General Dana Nessel and her team for their commitment to finding the truth and fully investigating all possible criminal activity.”

A spokeswoman from the Michigan attorney general’s office told CBS News that she could not comment on an ongoing investigation, but added investigators were “working diligently.”

In a statement, Snyder’s legal team said the Michigan Attorney General’s Office of Special Counsel has “refused to share information about these charges with us.”

Chip Chamberlain, an attorney representing Lyon, said any charges filed against his client would be “an absolute travesty of justice.”

“The original charges filed in June 2017 were politically motivated and meritless, and after two years of baseless claims and personal attacks they were dismissed,” Chamberlain said. “Moreover, in protracted federal litigation, the Attorney General successfully argued that Mr. Lyon was not responsible.”

Jamie White, who represents Flint’s former Department of Public Works director Howard Croft, confirmed to CBS News that they have been told to expect charges, but have not been given any information on what charges may be coming.

White insisted his client has done nothing wrong.

White noted that Croft was living in Flint with his family at the time of the onset of the crisis.

Representatives for Rich Baird, a former aid to Snyder, also confirmed they were told to expect charges.

“At this time, we have not been made aware of what the charges are, or how they are related to his position with former Michigan Governor Rick Snyder’s administration,” attorney Randall Levine said in a statement.

The news comes years after multiple probes were launched into the government’s role in the crisis. Thousands of lawsuits were filed against the city and state after a local medical center found that most children in the city had over 50% more lead in their systems than their peers, a devastating figure that could be traced directly to the Flint water source.

The crisis began in 2014, when the city of Flint switched its water source from treated water from Detroit to the Flint River in an effort to save money. The city failed to treat the water properly, allowing massive amounts of lead from old pipes to be pumped directly into Flint homes.

Residents became alarmed when brown, foul smelling water began pouring from their taps. Flint officials assured them that the water was safe, but one physician estimates over 14,000 children in Flint were exposed to lead. Snyder only declared a state of emergency in January of 2016, after federal officials announced their own investigation.

“Let me be blunt, this was a failure of government at all levels,” Snyder said during a 2016 Congressional hearing. “Local, state and federal officials — we all failed the families of Flint.”

In August 2020, the state of Michigan announced a preliminary $600 million settlement for families affected by the water crisis. While the money went toward over 10,000 active claims against the Michigan government, many Flint residents felt like the money couldn’t bring back their safety.

Years later, many Flint residents still don’t trust their drinking water. Parents can still be seen buying bottled water by the gallon, a costly precaution that has only become harder since the start of the coronavirus pandemic.

“It’s almost like we got PTSD with the water because we don’t really drink it comfortably, like, you know what I’m saying?” one Flint resident told CBS News. “People actually lost their lives to it.”

According to Mayor Neeley, the replacement of household water service lines is “nearly complete.” Of the 26,750 lines that have been excavated, fewer than 500 are left to be checked, Neeley said in a statement.