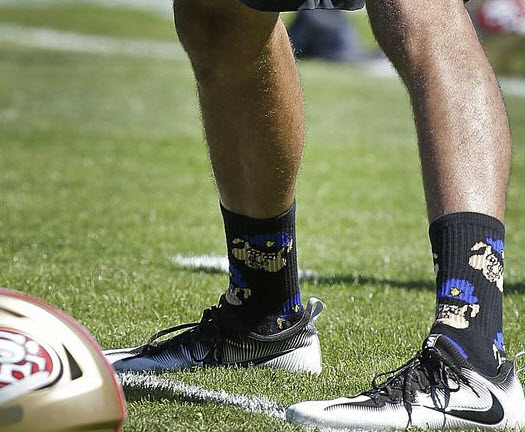 The executive director of one of the largest police organizations in the country blasted Colin Kaepernick and the NFL on Thursday after learning that during training camp practices in August, the San Francisco 49ers quarterback wore socks that bear the image of cartoon pigs wearing police hats.

“It’s just ridiculous that the same league that prohibits the Dallas (Cowboys) football club from honoring the slain officers in their community with their uniforms stands silent when Kaepernick is dishonoring police officers with what he’s wearing on the field,” Bill Johnson, executive director of the National Association of Police Organizations (a coalition of police unions and associations from across the country), told USA TODAY Sports.

(The Cowboys’ plan to use a helmet decal as a tribute to the five police officers killed in July’s sniper attack was denied by the NFL, according to a published report.)

“I think the league is in a downward spiral regarding their obligations to the public under (Commissioner) Roger Goodell,” added Johnson, “and this is just another example of that.”

The NFL chose not to provide an official response until the league office had consulted the 49ers, who play the San Diego Chargers on Thursday night in their final preseason game.