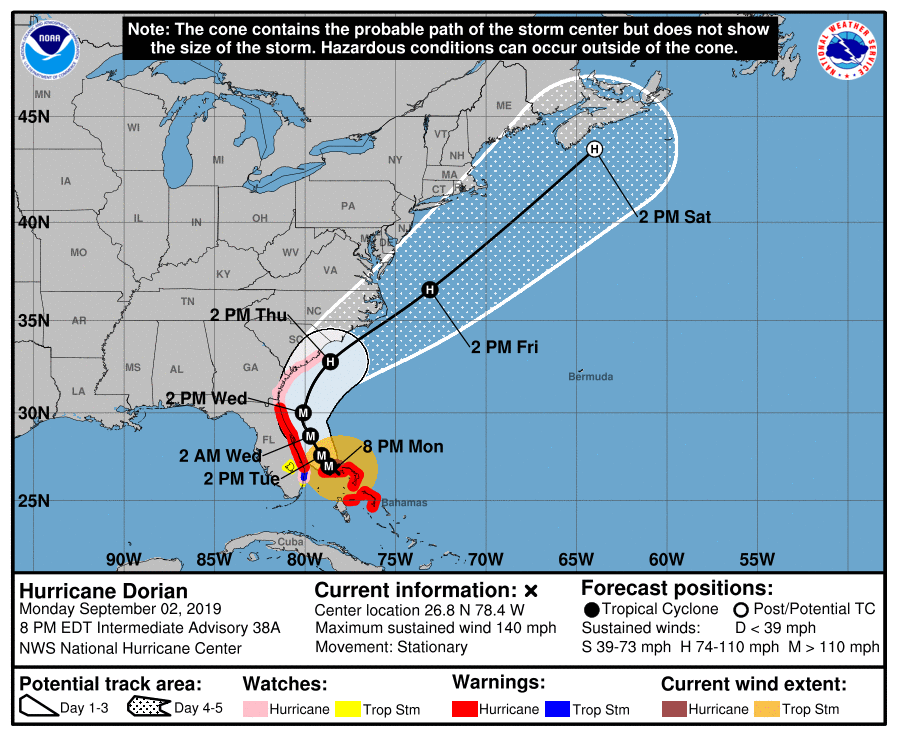 In 24 hours, Hurricane Dorian has inched a mere 70 miles.

In that time, the deadly storm razed parts of the northern Bahamas, set records as a ferocious Category 5 hurricane and took at least five lives, according to Prime Minister Hubert Minnis.

Meanwhile in Florida, residents watched the already-devastating storm crawl toward them — waiting for a northern turn that would spare the coast from the worst of the 140 mph winds.

As of the 8 p.m. advisory, the Category 4 storm was sitting “nearly stationary” 105 miles off the coast of West Palm Beach and still wreaking havoc in Freeport, flooding shelters full of terrified evacuees and swamping the airport. While latest updates showed Dorian is hovering, the storm has begun to creep north, about .2 degrees in latitude in the last day, perhaps the first sign of the long-predicted northern turn.

And on Monday evening the first signs of cautious confidence emerged from Tallahassee that Dorian would indeed turn north, but they were quick to note that a turn doesn’t take the coast totally out of danger.

“A direct landfall is not completely ruled out,” but the probabilities have diminished, said Derek Giardino of the National Weather Service at the last briefing of the night at the state Emergency Operations Center in Tallahassee.

National Hurricane Center forecasters predict Dorian will turn in the next day or so near Palm Beach County and weaken as it travels up the coast, with about an 80 mile buffer between the eye wall and the packed shore. The storm has hurricane force winds extending 45 miles in either direction from the center, with tropical storm force winds stretching 150 miles each way.

“We’re concerned about the St. John’s River,’‘ he added, estimating it will rise about 3.5 feet and lead to flooding beginning Wednesday. He predicted severe beach erosion and flooding in the City of St. Augustine, similar to damaging floods that swamped the city after Hurricane Matthew.

Kevin Guthrie, deputy director of the Division of Emergency Management, explained Dorian’s rain bands and wind circulation will cause the north-flowing river to rise “for the foreseeable future” into next week. He reminded the state’s emergency res ponders to be prepared and positioned for rescues in the event of fast-rising water.

On Labor Day, much of Florida’s coast remained under a hurricane or tropical storm watch, but as of the 5 p..m. update all of South Florida was out of the cone. Some tropical storm force winds are expected to hit Broward County by Monday night. There are no watches or warnings in Miami-Dade.

Instead of Labor Day barbecues, residents across Florida hunkered down in their shuttered homes, already stocked up on gas, water and snacks, glued to television news stations.

At Sexton Plaza, a popular beach-side hub in Vero Beach, gawkers took selfies in front of the increasingly choppy surf. A blustery wind blew salt and sand as a police officer, Jennifer Brumley, urged them to evacuate east of U.S. Highway 1.

“People have been talking about this turn, but it hasn’t turned yet,” Brumley said. “It’s still heading west. It could turn. We want it to turn, but what if it doesn’t?”

Gusts of tropical-storm force winds were starting. One gust of 47 miles per hour was reported at the Juno Beach Pier, according to the National Weather Service.

“It’s going north,” said Ann Huff, a 30-year Juno Beach resident who huddled under a sea grape tree near the beach with her husband and French Bulldog as a rain squall passed through. “When I was pregnant, I knew I was going to have a boy. I have the same feeling here. It’s going north.”

Residents of 72 nursing homes or assisted living facilities along Florida’s coast have been evacuated, and some hospitals from New Smyrna Beach to Port St. Lucie have begun evacuating patients.

Gov. Ron DeSantis, at a morning press conference, implored healthcare facility administrators to update the state on how their generators are working and their evacuation status. “If you have a generator, and something’s wrong with the generator, you need to tell us that,” he said.

The 5 p.m. update showed a forecast that put Dorian on a path even further out to sea, despite the stall in the Bahamas.

This was welcome news in Martin County, which only two days ago was shown to be almost the exact spot the powerful cyclone was going to make landfall in Florida.

“If you went on the streets of Martin County and rolled your windows down, you would hear a collective sigh of relief,” Martin County Sheriff William Snyder said during a 5:30 p.m. press conference Monday.

However, the area is still expected to experience tropical storm-force winds, and maybe stronger hurricane force winds, before it moves its way up the coast Wednesday. Martin County opened five shelters, which had 1,200 occupants by Monday afternoon.

Bill Johnson, Palm Beach County’s director of emergency management, said there were about 2,600 people across the county’s 11 open shelters at last count. With Broward County under a tropical storm watch, Mayor Mark Bogen said shelters were only about 7 percent of capacity.

Families started streaming in Monday afternoon, carrying blankets and pillows. Children clutched stuffed animals. Inside, people can get a meal, bathe and watch weather updates from a large TV tuned to the news.

“Where I’m living, I just didn’t feel safe,” said Stefanie Passieux, 35, who smoked a cigarette outside the Fort Pierce school as rain began to fall.

Over in the Bahamas, the scope of the historic hurricane’s wrath was clear.

Residents in the capital of Nassau were trying to escape rising water in the midst of an island-wide blackout.

Donald Rolle, the administrator for South Abaco, described the scene on North Abaco as sheer devastation. “Pray for us,” he pleaded.

In Marsh Harbour, close to the spot where Dorian made its second landfall, one Abaco resident reported whole buildings gone, metal roofs that had vanished and terrible destruction.

“Just total devastation in Marsh Harbour,” said Laine Snow, whose home in Little Harbour about 20 miles to the south was spared the worst of the winds. “It is devastating and extremely emotional. There’s no businesses left. There’s just absolutely nothing,” she said.

She said restaurants near the water in Marsh Harbour were destroyed, all the boats in the harbor were damaged or gone and the main supermarket, Maxwell’s, lost its metal roof.

After pounding the Abacos and leaving a trail of snapped trees, flipped-over cars and missing rooftops in the northern Bahamas, Dorian moved over to low-lying Grand Bahama, where it stalled for hours. The Bahamian press reported that the airport at Grand Bahama Island was under five feet of water.

Islanders reported tidal surges of up to 23 feet. Wind gusts were clocking in at up to a staggering 200 milers per hour. “These hazards will continue over Grand Bahama Island during most of the day, causing extreme destruction on the island,” the National Hurricane Center said in a 10 a.m. advisory.