ICE Officers Round Up 113 Criminal Aliens in New Jersey Sweep 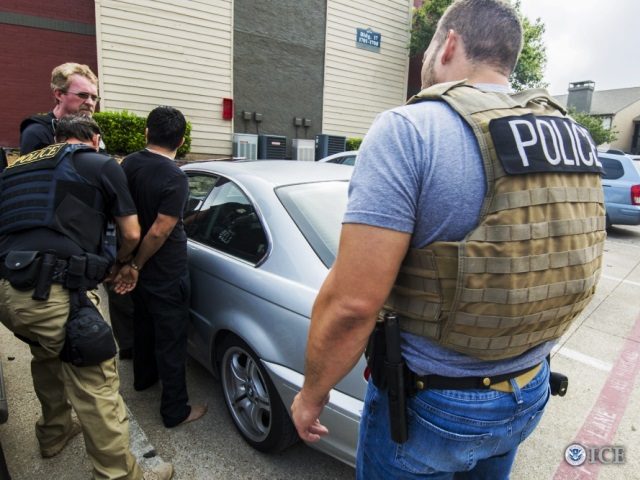 U.S. Immigration and Customs Enforcement’s (ICE) Enforcement and Removal Operations (ERO) officers arrested 113 criminal illegal aliens in New Jersey this week during a five-day “enforcement surge.”
Officers targeted criminal aliens throughout the state during an operation from June 5 to 9. Officials reported 93 of the illegal aliens arrested had criminal convictions and 87 percent of those arrested had felony convictions, according to information obtained by Breitbart Texas from ICE officials.

“The continued results of our Fugitive Operations officers and their law enforcement partners underscore ICE’s ongoing and steady commitment to public safety,” Newark ERO Field Director John Tsoukaris said in a written statement. “As part of this operation, we continue focus on the arrest of individuals who are criminal and are a threat to public safety and national security. Because of the tireless efforts of these professional officers, there are 113 fewer criminals in our communities,” he added.

The criminal aliens nabbed ranged in ages between 18-years-old and 74-years-old. The crimes committed by these individuals included convictions for sexual offenses and offenses against children, including sexual assault on a minor, sexual exploitation of a minor, sex offense against a child/fondling, and child abuse. Other crimes against the person included aggravated assault, threats to kill, domestic violence and battery.