Idaho lawmaker threatens to call police on students, tells them ‘abortion is murder’ 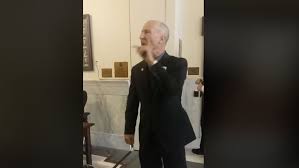 A state senator shouted Monday at University of Idaho students affiliated with Planned Parenthood, trying to schedule a meeting with him to discuss birth control and sex education.

Sen. Dan Foreman, R-Moscow, said he would call law enforcement officials if they attempted to visit his office at the Capitol again.

The students, who had traveled nearly 300 miles from the Moscow campus to participate in a Boise lobbying event, were trying to schedule a meeting with Foreman.

The Republican canceled at the last minute. The students left him a note and condoms in his office before moving on to other scheduled meetings.

The students and Foreman passed in a hallway. He emphatically refused to speak with them in an exchange that several people recorded on camera.