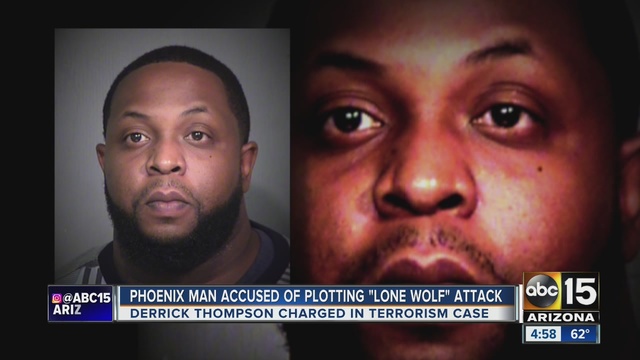 PHOENIX – Investigators say a Phoenix man was plotting a lone wolf attack in support of ISIS.

Derrick Thompson, who also goes by the name Abu Talib Al-Amriki, was arrested by the Arizona Joint Terrorism Taskforce earlier this week.

In October, investigators say Thompson made several Google searches including: midnight mass, martyrdom vs suicide and which type of gun is the most powerful. He also reportedly posted on his Google Plus account in October, “We need to get down with this ISIS S***.”

According to court paperwork, it was January 2015 when Thompson tried to buy gun from backpage.com with the intent to carry out an attack for ISIL. However, Thompson is a convicted felon – which prohibits him from buying a firearm.

Investigators say since 2014, Thompson has been an “avowed jihadist,” and has conducted 100’s of Google searches for handguns, rifles, scopes and crossbows.