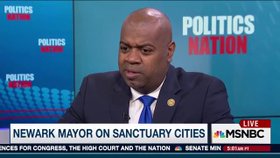 Baraka said, “I think that them targeting sanctuary cities is a way for them to tell mayors and other folks around the country: one, that they’re sticking to what, I think, is a very unconstitutional and un-American policy. And trying to intimidate us into being what I’ve called ‘fugitive slave catchers’ that run around and do their bidding in our cities. And if we refuse to do that, then it makes it difficult for them to continue their policy because they don’t have the resources to kind of run down all the undocumented residents locally.”