‘No cop-free zone’: Police chief says officers are responding to CHOP with caution 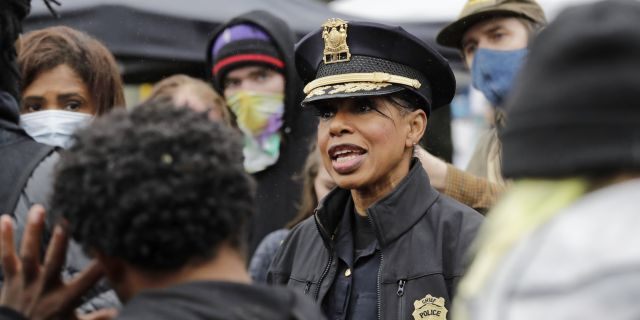 Videos posted to social media early Monday show a group of protesters toppling a chain-link fence outside an auto repair shop in Seattle’s Capitol Hill neighborhood, after the business owner reportedly called 911 repeatedly to report a break-in and fire but no police officers responded to the scene.

A message left for John McDermott, the owner of Car Tenders in the 1700 block of 12th Avenue, was not immediately returned Monday. The location of the shop, between East Olive and East Howell streets, appears to be just outside the boundaries of the Capitol Hill Organized Protest (CHOP), previously known as the Capitol Hill Autonomous Zone, centered around the Seattle Police Department’s now-closed East Precinct on the corner of 12th Avenue and Pine Street.

KIRO 7 TV reported that McDermott called 911 to report the break-in and that he and his son detained a suspect, who stole money and keys, and set a fire on the front counter that McDermott and his son quickly doused. According to the TV station, McDermott called 911 more than a dozen times and said police never showed up and armed protesters insisted they release the suspect, which they did to avoid potential violence.

Seattle police Chief Carmen Best, speaking outside Seattle police headquarters Monday afternoon, said police had received a 911 of someone breaking windows with a hammer and the caller reported that his business was on fire.