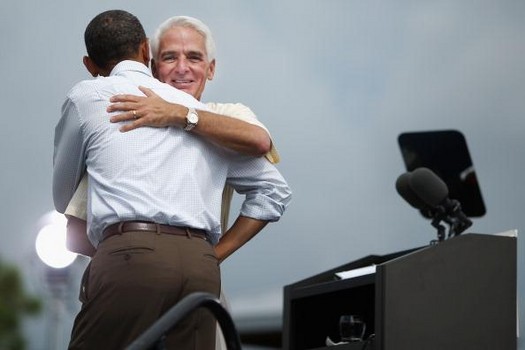 Florida’s former GOP governor, chased from the party during the 2010 Senate primary by photos of him embracing the president during Obamaâ€™s 2009 stimulus tour, is now an independent and spoke for Obama Thursday at the Democratic National Convention.

Here, Crist â€“ now an independent but spoken of widely as a Democratic candidate for the 2014 governorâ€™s race — delivered another endorsement of the president, telling 11,000 people at the local St. Petersburg College campus that â€œit takes a cool head to win a hot game.â€

As Obama joined Crist on the stage, the two men embraced each other in a full man hug, wrapping themselves in each otherâ€™s arms.

The president then delivered a speech virtually identical to ones he gave Friday in New Hampshire and Iowa, which were derivative of his Thursday night nomination acceptance speech in Charlotte, N.C.