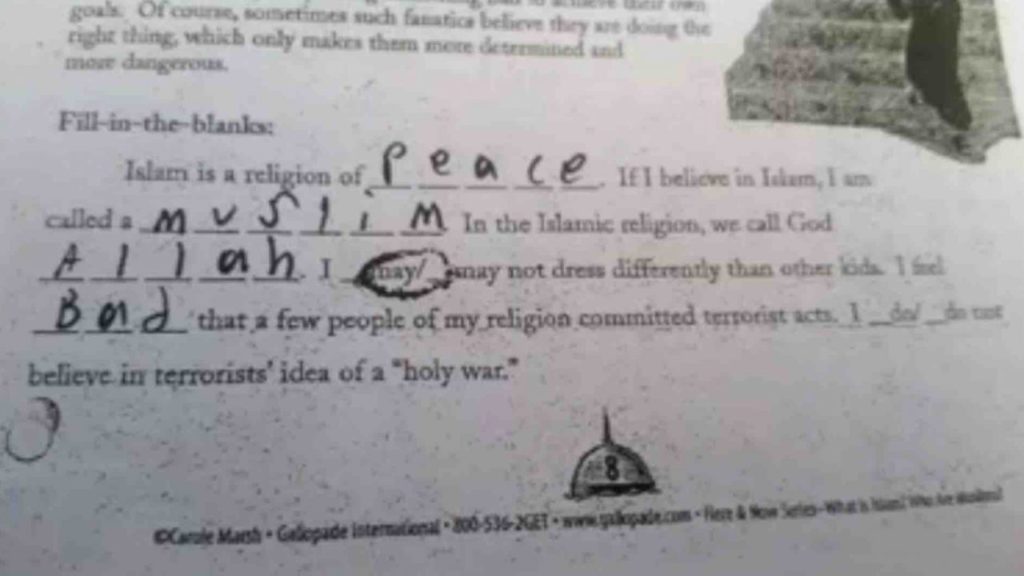 South Carolina parents are fuming after their children’s sixth grade school teacher handed out a worksheet titled “The Five Pillars of Islam.”

Students at Alston Middle School in Summerville, South Carolina, were assigned the worksheet, which tested their knowledge of the Quran, WCSC-TV reported.

One section of the worksheet instructed students to match certain passages from the Quran with the Pillar it most closely supports. One of the questions in that section quoted a verse from the Quran, which reads: “Allah: There is no god but Him, the Living, the Eternal One. Neither slumber nor sleep overtakes Him.” The correct corresponding pillar was for that particular passage was the first Pillar of Islam, which states, “Proclaim there is no god but Allah, and Muhammad is his Prophet.”

Another section had students fill in the blanks. One statement, once completed, referred to Islam as a “religion of peace.” Another blank instructed students to say how Muslims feel that “a few people of my religion committed terrorist acts.” Pupils were also asked to circle whether Muslims “do” or “do not” believe in “terrorists’ idea of a ‘holy war.’”

132 Comments - what are your thoughts?