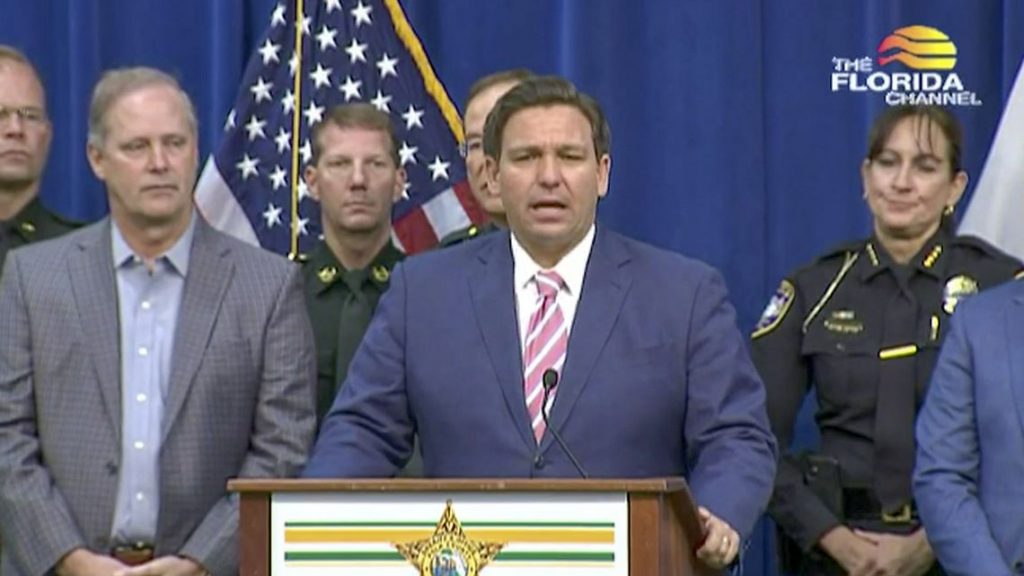 TALLAHASSEE — Gov. Ron DeSantis and some of the state’s top Republicans want to crack down on people who are involved in what DeSantis called “disorderly assemblies.”

DeSantis, speaking at the Polk County Sheriff’s Office in Winter Haven on Monday, called for a law that would give felony penalties to protesters who block traffic without a permit and to protesters who participate in gatherings of seven or more people that result in injuries or property damage.

Flanked by law enforcement officials and top legislative Republicans, DeSantis said the proposal, the “Combating Violence, Disorder and Looting and Law Enforcement Protection Act,” would be a “focal point” of the state’s next legislative session. The session begins March 2021.

DeSantis also attacked calls to “defund” the police, saying any municipality that moves to do so would lose any state funding. The term “defund the police” can mean many different things, including redirecting money for police departments to other governmental agencies for housing, mental health interventions and other social services.

The governor’s proposal is vague, saying it would prohibit grants or state funding to any municipality that “slashes” the budget for a law enforcement agency. DeSantis added that local governments would not be allowed to “disproportionately” single out law enforcement agencies for cuts.

— Arek Sarkissian (@ArekSarkissian) September 21, 2020
The Republican governor made the announcement with incoming Florida House Speaker Chris Sprowls and incoming Senate President Wilton Simpson — both Republicans — by his side.

The tough new proposed laws come in response to tumultuous protests across the country that were sparked by recent high-profile deaths of Black people at the hands of police officers. The deaths of George Floyd in Minneapolis, Minnesota and Breonna Taylor in Louisville, Kentucky, sparked protests and, in some cases, riots, property damage and looting this summer.

Although rare protests in Florida resulted in property damage, the Sunshine State has largely been spared the kind of civil unrest seen in places like Portland. In fact, some organized protests in South Florida proactively intervened to keep people from taking action that would provoke police or damage property in neighborhoods or business areas.

The measure proposed Monday by top Republicans would enact a six-month mandatory minimum sentence to anyone convicted of striking a law enforcement officer during an unlawful assembly. It would also prohibit anyone charged with crimes related to such assemblies from being released on bail or bond before an initial court hearing before a judge.

And it would become a felony to destroy public property, including a statue or monument, during an illegal assembly, the governor said. Those who are found to have helped fund or organize an unlawful protest could be subject to federal prosecution under the Racketeer Influenced and Corrupt Organizations Act, he said.

A driver who is forced to flee from a “mob” during an unlawful protest would not be liable for injury or death in a potential accident under the proposed law, according to a release from the governor’s office.

That portion of the proposal drew heavy criticism from Andrea Mercado, the executive director of New Florida Majority, a statewide progressive organizing group.

“Let me be clear: Gov. DeSantis is proposing legislation that would effectively legalize violence against protesters in the state of Florida,” Mercado said in a statement.

If the Legislature passes a law that aligns with the governor’s proposal next session, state and local governments would be prohibited from hiring people who have criminal records related to disorderly gatherings. And people who are already government employees who are convicted of participating in a disorderly assembly could be fired and lose their state benefits.

The announcement about the proposal comes at a time when President Donald Trump, a DeSantis ally, is making law and order a central focus of his re-election campaign.

“It’s transparent and obvious that it’s a political move to play into Trump’s national message as if there is no law and order in this entire country,” said Senate Minority Leader Audrey Gibson, D-Jacksonville.

Sen. Jeff Brandes, R-St. Petersburg, who has long called for criminal justice reform measures, said he was not in contact with Republican leadership in the run-up to the announcement. Brandes said it is unclear to him why Florida’s current laws are insufficient in dealing with unruly protests.

“I can’t see someone who throws a brick at law enforcement not getting six months without a mandatory minimum,” Brandes said, noting early Monday afternoon that he had not read the entire Republican proposal. “While I agree we have to support law enforcement 100 percent, we also have to recognize the right afforded to citizens to peacefully protest.”

DeSantis argued that if potential bad actors have a clear idea of the penalties associated with striking law enforcement officers during protests, they’ll be less likely to do so.

But criminal justice advocates have long argued that mandatory minimum sentences do not actually dissuade people from committing crimes.

Law enforcement officials at the news conference thanked DeSantis for the proposals.

“For everyone across the United States today, this is what leadership looks like,” said Polk County Sheriff Grady Judd, a staunch conservative. “So I ask the other states: where’s your governor? Where’s your speaker of the House? Where’s your president of the Senate? Why aren’t they standing together? This is remarkable.”

DeSantis’ call to penalize municipalities if they opt to “defund” their police agencies struck some politicians as unnecessary given how cities have navigated the issue this year.

Despite calls from some protesters, Florida cities have largely refrained from sweeping changes to police departments. For instance, Tampa, a city led by Mayor Jane Castor, a Democrat, and a Democrat-controlled city council, passed a budget last week that included a $13 million increase in police funding.

Even in South Florida, the most left-leaning region of the state, discussions about decreasing police budgets have gone nowhere. However, leaders in that part of the state criticized DeSantis Monday for what they said was overreach on the part of the state government.