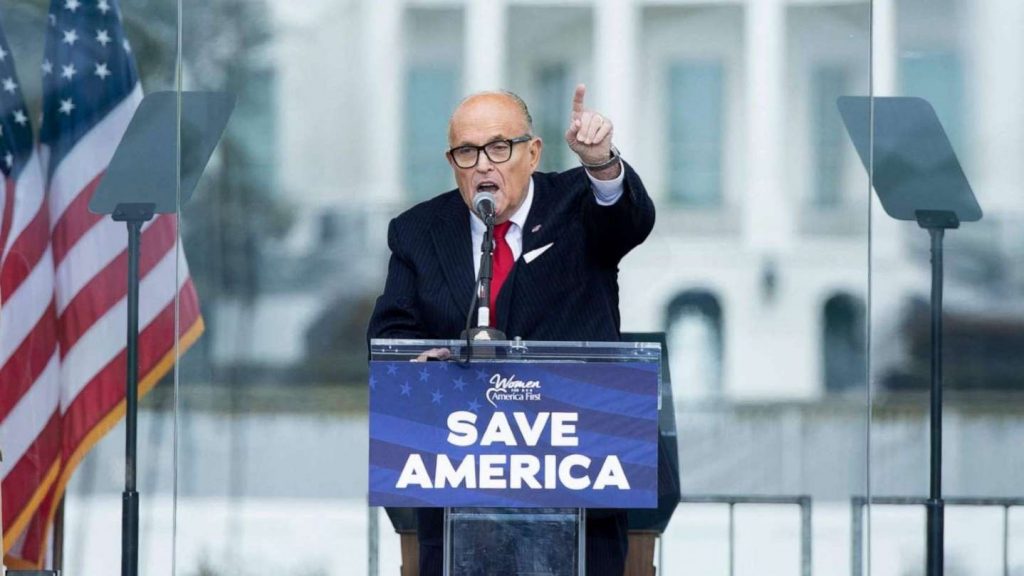 Giuliani is one of the few lawyers defending the president as prosecutors consider whether to charge him for inciting the Jan. 6 riot at the U.S. Capitol.

The investigation would stain Giuliani’s record but would not result in his disbarment, which would be handled by the Appellate Division of the New York Court System.

Removal from the membership of the bar association could, however, make it more challenging for Giuliani to represent Trump, though it wasn’t immediately clear how the reprimand would affect him outside of New York.

In a statement, the association noted Giuliani’s words at the “Save America” rally that preceded the riot.

MORE: Trump allies helped plan, promote rally that led to Capitol attack
“If we’re wrong, we will be made fools of, but if we’re right a lot of them will go to jail,” Giuliani told rally-goers on Jan. 6 before they marched on the Capitol. “Let’s have a trial by combat.”

“NYSBA’s bylaws state that ‘no person who advocates the overthrow of the government of the United States, or of any state, territory or possession thereof, or of any political subdivision therein, by force or other illegal means, shall be a member of the Association,'” bar association officials said in the statement. “Mr. Giuliani’s words quite clearly were intended to encourage Trump supporters unhappy with the election’s outcome to take matters into their own hands. Their subsequent attack on the Capitol was nothing short of an attempted coup, intended to prevent the peaceful transition of power.”

The bar association said it subsequently received hundreds of complaints about Giuliani, and the investigation is based on those complaints and Giuliani’s public statements.

In media appearances and in court testimony, the former New York City mayor has leveled unproven accusations of voter fraud in an attempt to overturn the results of the 2020 election.

In interviews with “60 Minutes” that aired Sunday, Georgia election officials accused Giuliani of knowingly lying when he testified last month before the Georgia state Senate about allegations of voter fraud.

“From my point of view, they [Trump’s attorneys] intentionally misled the state senators, the people of Georgia and the people United States about this, to cause this conspiracy theory to keep going and keep the disinformation going, which has caused this environment that we’re seeing today,” Sterling said. “Rudy Giuliani looked them in the eye and lied.”

Bar association officials said that Giuliani will have a chance to explain himself to the association if he so chooses.

“This decision is historic for NYSBA, and we have not made it lightly,” association president Scott Karson said. “We cannot stand idly by and allow those intent on rending the fabric of our democracy to go unchecked.”

A spokesperson for Giuliani did not respond to a request for comment from ABC News.