Sanders starts 2020 in strong position in Iowa and New Hampshire 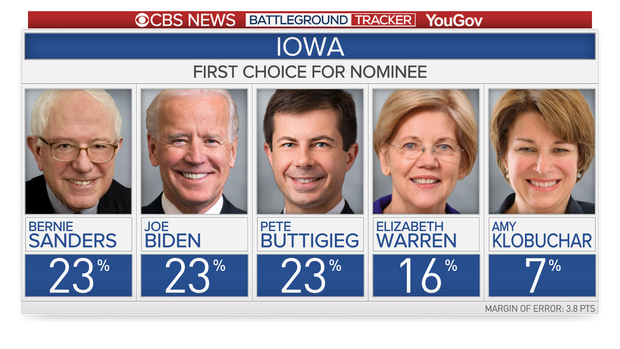 The New Year opens with Bernie Sanders in his best standing yet against the field in Iowa and New Hampshire. He’s in a first-place tie with Joe Biden and Pete Buttigieg in Iowa. All three are at 23%, and each would get a similar number of delegates out of the caucuses if they were to take place today, according to the CBS News Battleground Tracker. Sanders also now has a narrow edge in New Hampshire, with a two-point lead over Biden.

Meanwhile, Elizabeth Warren has slipped in New Hampshire since November, as liberal voters have moved toward Sanders instead. However, she’s still in position to get delegates there.

There’s at least one thing keeping this race in flux: If Democrats’ New Year’s resolution is to beat President Trump, none of the candidates has yet convinced a majority he or she can do it.