They won’t build it! Hardhats vow not to work on controversial mosque near Ground Zero 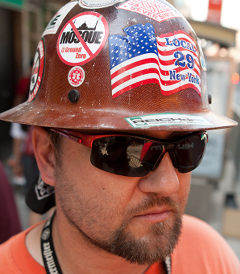 A growing number of New York construction workers are vowing not to work on the mosque planned near Ground Zero.

“It’s a very touchy thing because they want to do this on sacred ground,” said Dave Kaiser, 38, a blaster who is working to rebuild the World Trade Center site.

“I wouldn’t work there, especially after I found out about what the imam said about U.S. policy being responsible for 9/11,” Kaiser said.

The grass-roots movement is gaining momentum on the Internet. One construction worker created the “Hard Hat Pledge” on his blog and asked others to vow not to work on the project if it stays on Park Place.

“Thousands of people are signing up from all over the country,” said creator Andy Sullivan, a construction worker from Brooklyn. “People who sell glass, steel, lumber, insurance. They are all refusing to do work if they build there.”

“Hopefully, this will be a tool to get them to move it,” he said. “I got a problem with this ostentatious building looming over Ground Zero.”

A planned 13-story community center and mosque two blocks from Ground Zero, Park51 has exploded into a national debate.

Louis Coletti, president of the Building Trades Employers’ Association, said unions have not yet taken a “formal position” on Park51, but he understands why members would be hesitant to work there.

“It’s a very difficult dilemma for the contractors and the organized labor force because we are experiencing such high levels of unemployment,” he said. “Yet at the same time, this is a very sacred sight to the union guys.”