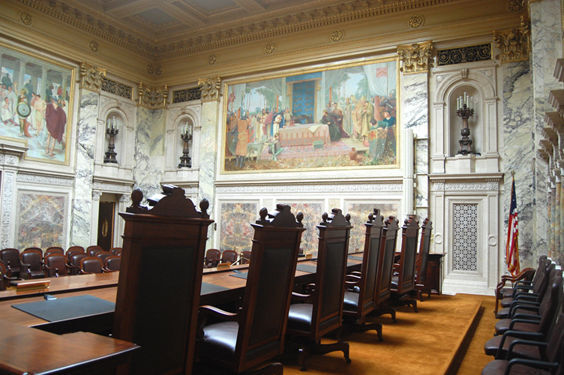 MADISON – The state Supreme Court told election officials Thursday that absentee ballots should not be mailed for now so the justices can determine whether they should include the Green Party’s presidential ticket.

The 4-3 order left open the possibility of reprinting 2.3 million ballots and delaying the printing of others — moves that election officials said would cause them to miss deadlines set by state law.

The order fell along ideological lines, with the conservatives in the majority and the liberals in dissent.

In response to the order, the state Elections Commission submitted a report late Thursday that suggested as many as 378,000 ballots have already been sent to voters. But the head of the commission said there was no way to know for certain how many ballots have been sent because that duty falls to municipal clerks, not the commission.

Adding candidates to the ballots after some have been sent would be complicated. Voters who have already been sent a ballot would need to get a second one and clerks would have to make sure no one voted twice.

County officials expressed frustration with the court handling the case so near the deadline for sending ballots to voters. Those concerns were noted in a spreadsheet they filled out for the commission that was later provided to the court.

“We feel this is almost impossible at this point,” Monroe County told the commission.

In its order, the court told the commission to advise municipal clerks that they should not mail any absentee ballots until further order of the court.

Most ballots have already been printed and requiring them to be reprinted with the names of more candidates could cause significant delays, according to election officials. Those delays could make it harder for some voters to cast ballots, particularly those who live overseas or are serving in the military.

The majority wrote that it was issuing the order because it needed “definite factual information about whether and when absentee ballots have, in fact, been printed, requested and mailed.” But the commission said it was unable to gather much information from nearly 2,000 local officials within several hours, as the court ordered.

The order was unsigned but issued by the court’s conservatives, Chief Justice Patience Roggensack and Justices Rebecca Bradley, Brian Hagedorn and Annette Ziegler.

“Given the breadth of the information requested and the minimal time allotted to obtain it, I fear that the majority of this court is asking the impossible of our approximately 1,850 municipal clerks throughout the state,” Ann Walsh Bradley wrote for the dissenters.

Meagan Wolfe, the executive director of the Elections Commission, told reporters just before the order was issued that some absentee ballots likely have gone out but she didn’t know how many. Later, she filed an affidavit that said the number could be more than 378,000.

Clerks in large cities had been planning to mail their ballots in the coming days, she said. Those communities need to send their ballots out in batches over a few days because they have so many of them.

Clerks need to start soon because of a state law that requires them to mail them by Sept. 17, Wolfe said. Nearly a million Wisconsin voters have requested absentee ballots so far and mail voting this year is expected to hit a record because of the coronavirus pandemic.

Having to add names to the ballots after some have been mailed would create confusion and logistical headaches, Wolfe said.

“It would be incredibly challenging to manage that process,” she said.

Voters who have already been mailed a ballot would need to be sent a second one with the names of additional candidates. Clerks would put in place a time-consuming process to make sure no more than one ballot was counted from each voter, she said.

Regardless of whether ballots have gone out, requiring them to be reprinted now would cause major delays, according to Wolfe. Only a small number of vendors can print ballots, which must be printed on special paper with markings that can be read by optical scanners, she said in court filings this week.

Those vendors are in high demand during election season and Wisconsin clerks would go to the back of the line if they ordered new ballots now, she said.

The state Supreme Court has the power to suspend the state law that requires absentee ballots to be mailed by Sept. 17, but Democrats quickly noted a separate federal law requires them to be sent to military and overseas voters by Sept. 19.

“Someone needs to let Wisconsin (and its Supreme Court) know that FEDERAL LAW requires military and (overseas) ballots to go out at least 45 days before the election. It is day 54,” Democratic attorney Marc Elias wrote in a tweet.

Elias represents the Democratic National Committee in a separate lawsuit over how this fall’s election will be conducted in Wisconsin. A decision is expected in that case any day.

Unspoken at last month’s commission meeting was how the Green Party could affect the presidential election. Democrats fear the liberal party could take votes away from Democratic nominee Joe Biden and Republicans hope such a situation will help GOP President Donald Trump.

A separate case is pending in Brown County Circuit Court over whether to add rapper Kanye West to the ballot. The commission rejected West 5-1 after finding his team was seconds or minutes late in filing his paperwork last month.

Judge John Zakowski said Wednesday he was likely to rule in that case by next week. He expressed some concerns about the deadlines for mailing ballots but also said the state could send a second ballot to voters if he later determines West’s name should be added to the ballot.