by Jamie Hale, Beth Nakamura, and Dave Killen I The Oregonian
September 8, 2020 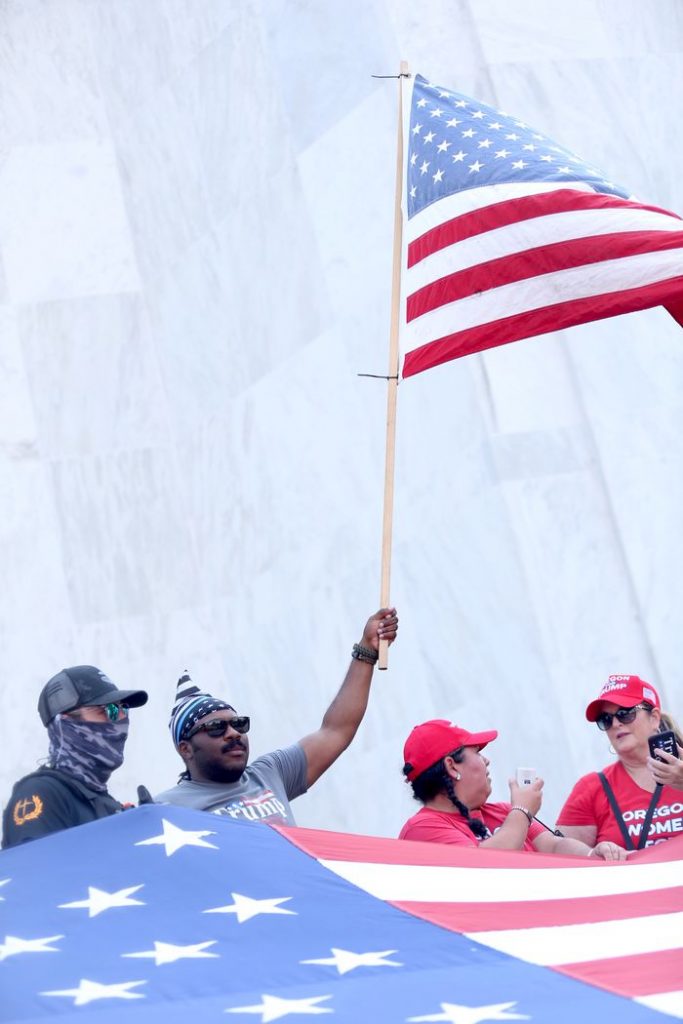 Right-wing activists and supporters of President Donald Trump caravanned down highways around the Portland area in support of the president and police, and in opposition to protests in Portland this summer.

Later, part of the group broke off to join a Trump rally at the Oregon State Capitol in Salem in the afternoon, which quickly spun off into violence and led to two arrests.

The “Cruise Rally” in support of President Trump began in the parking lot of Clackamas Community College in Oregon City on Monday morning. Several hundred people gathered, many dressed in red, white and blue, wearing “make America great again” caps and carrying signs bearing Trump’s likeness. The event was organized by Oregon For Trump 2020, a Facebook page for supporters of President Trump’s candidacy.

Speakers at the morning rally staked out their opposition to weeks of protests against police violence and in support of the Black Lives Matter movement since the death of George Floyd at the hands of the Minneapolis Police Department in May. Many invoked Christianity in their political stances and their support for President Trump.

Organizers said they did not plan on entering Multnomah County. Monday’s caravan officially ended after 3 p.m. when participants either continued to Salem or turned around at the Woodburn exit on Interstate 5.

More than 100 people attended the rally in Salem, including some members of right-wing group the Proud Boys, while a small group of counter-protesters supporting the Black Lives Matter movement stood nearby. Some in the right-wing group carried guns, baseball bats, sticks and pipes.

After unfolding a large American flag on the steps of the Capitol, right-wing protesters charged counter-protesters, leaving several injured. Right-wing protestors made a second rush later, tackling and beating at least one person, leading to two arrests.

One such speaker went on invoke conspiracy theories. He accused elected officials of pushing a “pedophilia agenda” and suggested that Democratic leaders “be shot dead in the street.” Video showed the line was met with applause.

Participants of both rallies Monday included members of Patriot Prayer and the Proud Boys, right-wing groups that have frequently fought with left-wing activists in downtown Portland, including those who identify as anti-fascist.

The downtown clash between those groups on Aug. 29 ended with a fatality. Jay Danielson, a supporter of local right-wing group Patriot Prayer, was shot and killed as he walked through Portland streets holding a can of mace and a collapsable baton. His suspected killer, Michael Reinoehl, was killed by police as they attempted to take him into custody.

Danielson had attended another car caravan in support of President Trump earlier in the day, and a pro-police demonstration the day before. Friends say Danielson liked to attend the events, but usually preferred to watch instead of getting involved in fights.

The Proud Boys are planning to hold another rally in downtown Portland on Sept. 26.