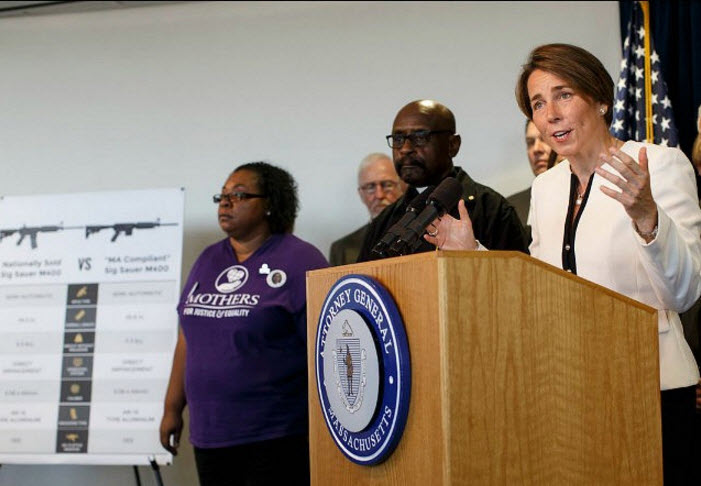 Healey’s directive means the ban on firearms with certain cosmetic features — “flash suppressors and folding or telescoping stocks” — also includes those that lack such features. The result is that firearms gun manufacturers reworked to achieve state compliance cannot be sold in Massachusetts any longer. And the 58 lawmakers who signed the letter argue that Healey’s changes actually constitute a “whole new law,” which is something they suggest she lacks the authority to do.

According to the Telegram, the letter was spearheaded by House Minority Leader Brad Jones (R) and Senate Minority Leader Bruce Tarr (R). In total, all 40 Republican lawmakers signed it, as did 18 Democrats — “four in the Senate and 14 in the House.”

The letter said, “We are particularly concerned that your Enforcement Notice was issued unilaterally, with very little, if any, advance notice for licensed gun dealers and lawful gun owners to adequately prepare for this new interpretation of the 1998 assault weapons law.” Breitbart News pointed to this same issue on July 25 when we reported that gun stores across the state could face financial ruin because of Healey’s actions. Gun store owners said the abruptness of Healey’s action coupled with the lack of clarity regarding which semiautomatic rifles — if any — remain legal to sell, has them in a lurch.

The 58 lawmakers who sent the letter to Healey made it clear that they wish she had pursued the gun control by asking the legislature to take it up and debate it, either passing or rejecting it, whatever the case may be. As it stands, House Minority Leader Jones believes Healey’s actions betray political calculations that have been in the works for some time.